But supporters say they are faster, fairer and more cost effective for dealing with Muslim family matters 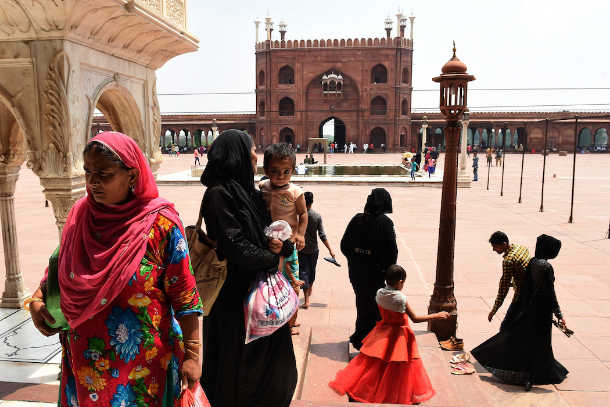 Debate is intensifying over a bid by Muslim groups in India to open more Sharia religious courts.

A non-governmental agency called the All India Muslim Personal Law Board (AIMPLB) has announced that there have been applications to open 10 new Sharia courts.

India's 172 million Muslims already have 74 Sharia courts overseen by the board in 15 states.

These religious courts deal with issues relating to marriage, divorce, maintenance, succession and inheritance according to Sharia without necessarily involving Indian civil courts.

Uttar Pradesh state with 38 million Muslims has 22 Sharia courts, while Maharashtra with 12 million followers of Islam has 23, the highest. The other 13 states share 29 such courts.

Last month, the board announced that 10 applications had been lodged with it to establish Sharia courts, of which five had been approved while the rest were under consideration.

However, a number of religious and civil society organizations complained that the growing number of Sharia courts is further undermining the authority of the judiciary.

Pankaj Mishra, a New Delhi based rights activist, told ucanews.com that the board's move was tantamount to 'Talibanization' of society.

The demand for more Sharia courts at the expense of the civil courts would create havoc by expanding the parallel justice system, Mishra said.

Sharia courts, popularly known as 'Darul-Qaza', commonly deal with marriage and divorce. Parties are usually willing to adhere to their decisions, or suggestions for reconciliation, in a convivial atmosphere without formal legal requirements.

The confidentiality of the process is maintained in accordance with Islamic precepts.

Indian law allows for the personal and family affairs of Christians and Muslims to be self-governed.

The civil courts can also take religious practices into consideration when dealing with matters such as divorce and child maintenance payments.

Ruchika Sharma, a supporter of the pro-Hindu Bharatiya Janata Party (BJP) that rules nationally and in many states, says the push for greater Muslim autonomy, including through increasing the number of Sharia courts, is part of a wider power play.

"Islamic banking or Sharia courts are deliberately pushed by a section of Muslim leaders only to establish a de facto authority to run their agenda, which may not necessarily be as per Islamic tenets," she said.

Anand Kumar, a women rights activist based in Bangalore, said at a time when Muslim women are fighting to end centuries of unjust treatment, the push for more Sharia courts is a diversionary tactic being pursued by religious conservatives.

She noted that Indian Muslim women have been fighting against the practice of instant divorce that allows a man to divorce his wife by saying "divorce" (talaq) three times in succession.

Kumar said the demand for greater application of Sharia was making a mockery of the justice system.

Sharia claimed to speed up justice

But Muslim scholars such as Molvi Abdul Hameed Shah, who is based in Jammu and Kashmir state, maintains that Sharia courts speed-up the dispensing of justice in a country where 25 million cases are already pending in civil courts and only 18 judges are available per one million Indians.

"What is wrong if a Muslim approaches the Sharia court," Shah said.

"They do it voluntarily to get issues resolved as per Islamic principles.

"The Indian constitution gives every citizen the right to practice their religion."

Qurat-ul-Ara, a Muslim woman, vouches for the speed and cost-effectiveness of Sharia courts compared to civil courts.

Six months after marrying, she applied for divorce, to escape ill-treatment by her in-laws, in a civil court.

However, proceedings were delayed and legal fees were higher than expected.

She subsequently approached a Sharia court and successfully divorced for a fraction of the cost.

"As long as the matter is related to your private life, and you prefer it to be addressed on religious grounds, there is no harm in approaching these courts for justice," Qurat-ul-Ara told ucanews.com.

According to research by Professor Biito Rani in West Bengal, Sharia courts have functioned in India since the Mughal empire was founded in India in the 16th Century.

Qazi, the judge in the Sharia court, has no ritual sanction or temporal powers, but can mediate between man and man, and man and God, Rani said in relation to the findings of her research.

The Sharia courts mainly deal with the disputes of Sunnis, who form some 75 percent of Indian Muslims.

The Shia, Bohra, Khoja, and Sufi sects do not follow this legal system.

India is home to some 11 percent of the world's 1.6 billion Muslims and has the third largest Muslim population after Indonesia and Pakistan.