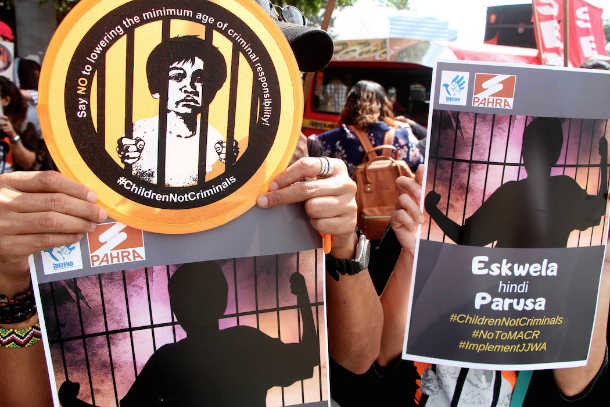 Child rights groups hold a protest outside the Senate in Manila on Feb. 4 against a proposed law that will lower the minimum age of criminal responsibility from 15 years old to 12. (Photo by Jhun Dantes)

Opposition to a proposal in the Philippine Congress to lower the minimum age of criminal responsibility from 15 years old to 12 continues to grow.

Human Rights Watch this week called on Philippine legislators to reject the proposal, saying it would only expose children to a "broken and debilitating" criminal justice system.

In a statement, the New York-based human rights group said efforts should instead be placed on improving government programs that will properly rehabilitate children in conflict with the law.

"Legislators should drop the proposed law and refocus their energies on reforming existing government facilities for children or replacing them with better options," said Carlos Conde of Human Rights Watch.

The Lower House of Congress earlier approved its version of the bill, a pet measure of President Rodrigo Duterte, amid strong opposition from children's rights groups.

Duterte wants to lower the age of criminal responsibility to stop drug and criminal syndicates from using young children to commit criminal acts.

Child rights activists, however, noted that at least 90 children have died in the government's almost three-year old "war against drugs."

Many children have also ended up in rehabilitation facilities as part of Duterte’s anti-narcotics campaign.

Human Rights Watch said the proposed law would mean that more and younger children would end up in many poorly managed facilities.

Under the proposed law, Bahay Pag-asa or Houses of Hope will be the main "reformatory" institutions for child offenders.

There are about 60 of these facilities around the country, most run by local governments. Many are in a state of disrepair, while some are not even functioning.

Children as young as 12 could be tried for criminal offenses. Those under 18 convicted of serious crimes would be incarcerated in juvenile reformatory centers.

The House of Representatives approved the bill on Jan. 28 while the Senate is expected to pass a similar bill this week.

Hundreds of child rights activists rallied outside the Senate in Manila on Feb. 4 as senators started deliberations on its version of the proposed law.

Opposition to the proposed bill has snowballed across the country, with at least 482 civil society organizations issuing statements against it.

The Child Rights Network, an alliance of children's rights groups, said lowering the criminal liability age runs counter to international obligations and standards that the Philippines is party to.

Article 37 of the United Nations Convention on the Rights of the Child states that the detention of children should be of last resort.

The group said detaining children as young as 12 years old "not only violates international legal obligations but is also detrimental to a child’s development."