Opinion: 'We are all Francis now' 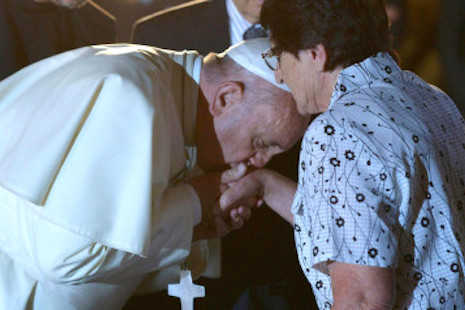 There were many striking images during the extraordinary 72 hours that Pope Francis spent in the Middle East. The Pope at the River Jordan, visiting with Syrian refugees, celebrating mass in Bethlehem, praying at the separation wall, uniting with the Ecumenical Patriarch, visiting the Dome of the Rock, leaving a note at the Western Wall, kissing the hands of Holocaust survivors... to name a few.

However, the image that stood out most to me was a spontaneous embrace between Sheikh Omar Abboud, Rabbi Abraham Skorka and Pope Francis in front of the Western Wall in Jerusalem. The three religious leaders from Argentina held to each other in solidarity, drawing strength from their friendship and experiencing a moment of sacredness; made more holy by one another's presence. These three representing the different faith traditions that inhabit the Holy Land offer to all of us a symbol of hope in a land that is desperate for peace.

Traveling with his Muslim and Jewish friends, the Pope used the powerful practice of compassion to hear and honor the stories of pain, struggle and hope of people in all different locations in the Mideast conflict. The Pope didn't take one side or the other, he took the side of peace and so can we.

I have gone to many of the same places that Pope Francis visited, and heard the stories of both Palestinians and Israelis. There is a lot of pressure to define where your allegiances lie and take one side against another. Being a progressive protestant minister whose great-grandfather, Louis Brandeis, was a powerful figure in the Zionist movement, I am committed to both the dignity and statehood for the Palestinian people as well as the protection and rights of the state of Israel. That position is dissatisfying to the more extreme voices on both sides, but it is the path that I believe the majority of people want in the Middle East and around the world.

Through his witness and statements, Pope Francis reminded us that we can recognize the injustice experienced by the Palestinian people and insist on the right of statehood for Palestine, and that does not diminish our support for the State of Israel. We can visit the separation wall and protest the damage the settlements are doing to the the Palestinian people, and at the same time we can insist that violence and terrorism is never legitimate or a pathway to peace. We can visit the Dome on the Rock and the Western Wall on the same day and pray for peace at both. We can honor the victims of the Holocaust and pledge our support for a homeland for the Jewish people, while visiting camps for Palestinians where poverty and degradation are a way of life and insist that they too deserve a homeland a secure future.

What's more, we can follow the Pope's example and move towards greater intra faith understanding. The animosity between different Jewish traditions within Israel and Muslims within Palestine is sometimes greater than those with people of other faiths. Pope Francis prayed with the Ecumenical Patriarch Bartholomew at the Church of the Holy Sepulcher taking one more step in the healing process of hostilities between the Orthodox and Catholic communities that has lasted over a 1,000 years. We are equally called to intra-faith reconciliation as we are to inter-faith.

At both the separation wall and at the Western wall, the pope offered the prayer that Jesus taught his followers known as the 'Our Father' that reads: Our Father who art in Heaven, Hallowed be thy name; Thy kingdom come Thy will be done, On earth as it is in heaven. Give us this day our daily bread; And forgive us our trespasses As we forgive those who trespass against us; And lead us not into temptation, But deliver us from evil. In both locations Pope Francis prayed for forgiveness, bread and the reign of peace and justice on earth as in heaven.

The Pope followed his heart and brought a reconciling spirit to even the most contentious places in the world. He showed all of us that we must not only pray for peace but be agents of peace here on earth. In his Sunday Mass in Bethlehem Square, the Pope insisted that the breakdown of the peace process was 'unacceptable' and invited Israel and Palestinian presidents to the Vatican. And they accepted!

Pope Francis is a powerful man, but he is just one person. He brought along two of his best friends from Argentina to help him along on the way of peace as nobody can create peace alone. Pope Francis has shown us a faithful, peaceful approach to the Palestinian/Israeli conflict. All of us can follow his example. We are all Pope Francis now. It is up to all of us.

Full Story: The Pope and Peace in the Middle East: We Are All Francis Now