The sister of a Kashmiri teenager killed in an altercation with Indian troops mourns at his funeral in Srinagar in this 2010 file photo. The ongoing conflict in Kashmir has been a key factor behind increasing numbers of young people committing suicide there. (Photo by AFP)

Tears roll down Hameeda Bano's cheek as she recalls how she found her 14-year-old son laying dead in his bedroom six months ago.

Holding a framed photo of her son, Zahid, close to her chest, the 43-year-old says she still can't understand why he took his own life.

It was during the morning that she knocked on Zahid's bedroom door. There was no reply, so she called her husband. "When the door was broken down, we found Zahid dead with strips of anti-depressant tablets lying nearby," Bano told ucanews.com.

Zahid is among thousands of teens who have chosen suicide as a 'way out' from a frustrating life in the northern Indian state of Jammu and Kashmir, a conflict-ridden Muslim-majority region neighboring Pakistan.

The region witnesses skirmishes between India and Pakistan that claim it as its own even as some of the local people fight for independence. This decades-long conflict has killed an estimated 50,000 people, of whom, 13,500 have been civilians. Rights groups have also accused the Indian army of committing human rights violations.

Bilal Wani, a research scholar at Kashmir University told ucanews.com that the ongoing conflict has indirectly had a disastrous impact upon teenagers in Kashmir.

"There are no employment opportunities, no forms of entertainment," said Wani.

Experts say young people in the region are increasingly becoming unable to handle depression and that suicide rates have been on the rise since conflict flared in 1989. 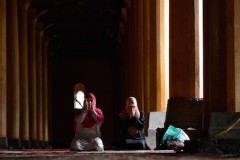 Studies conducted by Kashmir University reveal that the suicide rate was negligible in the Muslim-dominated area when Islamic militants initiated their armed struggle to liberate the region from Hindu dominated India.

During the past 21 years there has been an increase in suicides mainly among the young, say researchers at Kashmir's sole mental health hospital. Incidents have increased from 0.5 suicides per 100,000 people in 1989 to 20 deaths per 100,000 in 2007.

However, researchers say even these official figures are misleading.  Most suicide cases go unreported in Muslim society because it is a taboo act, says Shams-un-Nisa, who researched suicides in the region at Kashmir University as part of her doctoral studies.

Nisa said the real figures would be at least 10 times bigger.

"Most cases of suicides are hidden because it is 'haram' [forbidden] in Islam," Nisa told ucanews.com. A senior official at one of the major hospitals in Srinagar said the hospital receives at least 80 to 100 cases per week that are related to suicides. "Though the majority are saved, many die during treatment. Most cases are in the 14 to 18 years of age group," said the official who prefers to remain anonymous.

Parents who take their children to hospital are reluctant to share details about any suspected suicide attempts, the official told ucanews.com.

"They instead say it was food poisoning, a drug overdose or a drug reaction," the official said.

Psychiatrist Mushtaq Margoob believes some 90 percent of people who commit suicide in Kashmir are depressed because of the conflict's violence and its impact on them.

While waiting in a corridor in Kashmir's mental health hospital, 19-year-old Burhan keenly watches every passerby. A woolen muffle is wrapped around his face and he holds his mother's hand tightly. Three times Burhan has tried to end his life, but on each occasion his parents saved him.

His father Ghulam Nabi Dar told ucanews.com that Burhan has been emotionally distraught ever since he witnessed the death of a close friend in conflict related violence three years ago.

"No one at that time was able to console him. He used to cry for days. Then, one day, we found him lying on the floor with an empty paracetamol bottle in his hand," said Dar when speaking of his son's first suicide attempt.

But figures show most suicide victims in Kashmir are female. "Sixty two percent of all suicides in the valley involved females and the rest were males," says Bashir Ahmad Dabla, a sociologist from Kashmir University.

The conflict has been very difficult for women, he said. "In these conflict years, many women have been molested, raped, interrogated and have been harassed in various ways" Dabla said.

"A big portion of women became half-widows, whose husbands disappeared in these years. Many of these female victims overreact and commit suicide," he said.

"Preventive strategies are needed at all levels.… It is a Herculean task," says Arshid. Religious, social and political leaders need to implement a "multi-pronged strategy" to combat the issue, he said.