More than 300,000 people fled their homes and beachfront resorts as Typhoon Rai hit the southern and central regions 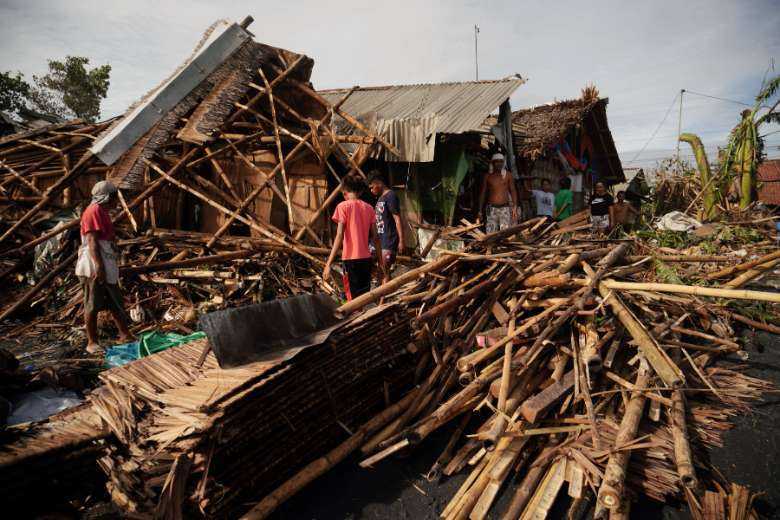 Residents salvage belongings from their destroyed homes in the coastal town of Dulag in Leyte province on Dec. 17, a day after Super Typhoon Rai hit. (Photo: AFP)

The strongest typhoon to hit the Philippines this year uprooted trees, toppled power lines and flooded villages as it barrelled across the archipelago today, leaving at least one person dead.

More than 300,000 people fled their homes and beachfront resorts as Typhoon Rai pummeled the southern and central regions of the country, knocking out communications in some areas and tearing roofs off buildings.

Rai was a super typhoon when it slammed into Siargao Island yesterday, packing maximum sustained winds of 195 kilometers per hour. By today, wind speeds had eased to 155kph, the state weather forecaster said.

"We are seeing people walking in the streets, many of them shell-shocked," ABS-CBN correspondent Dennis Datu reported from the hard-hit city of Surigao on the southern island of Mindanao.

"All buildings sustained heavy damage, including the provincial disaster office. It looks like it's been hit by a bomb."

Datu said the main roads leading into the coastal city had been cut off by landslides, fallen trees and toppled power poles.

The wind was very strong. Everything sustained damage — roofs blown off, access roads blocked by landslides

The national disaster agency confirmed one person had been killed and two others injured in the storm, which was heading towards the popular tourist destination of Palawan island.

More than 300,000 people had sought emergency shelter as the typhoon charged across the Pacific Ocean and smashed into the country, the agency said. About 18,000 had yet to return home.

Scores of flights were canceled across the country and dozens of ports temporarily closed as the weather bureau warned several-meter-high storm surges could cause "life-threatening flooding" in low-lying coastal areas.

"The devastation is hard to explain," said Joel Darunday, 37, a tour operator in the central island province of Bohol, who was hunkered down at home with his family when the storm ripped off the roof.

"It was very strong. The last time I experienced something like this was back in the 1980s."

People in the central city of Cebu cleared fallen trees, branches and debris from roads as clean-up efforts got under way.

Rai, locally named Odette, is hitting the Philippines late in the typhoon season, with most cyclones developing between July and October

A building and gym belonging to the Philippine Red Cross in the central province of Southern Leyte were badly damaged, with part of the roof torn off, photos posted by the organisation on Twitter showed.

Rai, locally named Odette, is hitting the Philippines late in the typhoon season, with most cyclones developing between July and October.

Scientists have long warned that typhoons are becoming more powerful, and strengthening more rapidly, as the world becomes warmer because of human-driven climate change.

Rai was moving across the Visayas region towards Palawan today and was expected to emerge tomorrow over the South China Sea, heading toward Vietnam.

The Philippines — ranked as one of the world's most vulnerable countries to the impacts of climate change — is hit by an average of 20 storms and typhoons every year, which typically wipe out harvests, homes and infrastructure in already impoverished areas.

The deadliest cyclone on record in the Philippines was Super Typhoon Haiyan, which left more than 7,300 people dead or missing in 2013.