Free and fair elections an omen for hope 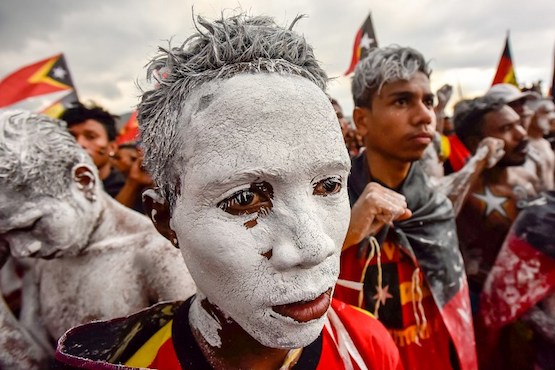 The proverbial elephant in the room during Timor-Leste's national election campaign is set to become more conspicuous in the aftermath of voting, freed from the constraints of self-serving political rhetoric. Populist electioneering by all and sundry effectively put on hold vital decision-making on development of new oil and gas reserves.

But time is running out for the overwhelmingly Catholic Southeast Asian nation in a multi-billion-dollar stand-off with multi-national companies amid tensions with neighboring Australia.

Smart choices on revenue raising and spending would reduce the still high number of premature maternal and infant deaths in Timor-Leste, also known as East Timor. On the other hand, critics of current policies fear blunders and corruption could exacerbate a phenomenon branded the 'resource curse.'

Indonesia's 1975 military invasion and 24 years of brutal rule were preceded by fighting between Timor-Leste pro and anti-Indonesian factions as lackluster long-time Portuguese colonists withdrew from the scene.

Independence was not secured until 2002 in the wake of a United Nations conducted plebiscite. Festering social wounds have never entirely healed. On July 22, some 750,000 voters cast ballots for the 65-seat national parliament. The two parties which dominated are centered on figures who fought in the war of attrition against Indonesia that cost hundreds of thousands of lives.

With more than 96 percent of votes counted, the Revolutionary Front for an Independent East Timor (Fretilin), led by Mari Alkatiri, had secured 29.67 percent support and the National Congress for Timorese Reconstruction (CNRT), headed by Xanana Gusmao, 28.54 per cent. The People's Liberation Party (PLP) of former President Taur Matan Ruak, and the left-of-center Parti Democratio (PD) each had garnered just over 10 per cent. A third party, Khunto, linked to urban martial arts groups, followed with a respectable 6.76 per cent. Tellingly in terms of political trends, these latter groups rejected continued funding of megaprojects such as tourist resorts in favor of improving access for ordinary folk to basic services.

And in the lead-up to the election, Timor-Leste's Bishop Basilio do Nascimiento urged voters to choose candidates who would improve health, sanitation, education and agriculture as well as provide clean water.

For now though, Fretilin and the CNRT's formation of a government of national unity in 2015 looks set to be reconstituted. While the smaller parties could well be offered ministerial posts, it is the so-called 'old guard' that will hold the purse-strings.

However, with financial reserves declining, along with oil and gas production from existing fields, the vexed issue of how best to exploit the Greater Sunrise gas and oil field looms so large that it is casting a shadow over the adolescent island nation state.

Xanana Gusmao, widely respected for his armed resistance to Indonesia, has pushed for Greater Sunrise gas to be piped to Timor-Leste for refining despite logistical and cost impediments. Critics maintain that the proposal is a pipedream raising unrealistic expectations of downstream industrial and other development. A consortium led by Woodside argues the gas should be processed on a floating platform.

In the now concluded election campaign, all the contesting parties sought to strike a nationalistic cord, proclaiming the plucky country ready to stand up against both corporate Goliaths on gas processing and the Australian government on maritime boundaries.

While there has long been an agreement to the principle of Timor-Leste and Australia sharing the Greater Sunrise field, a U.N. conciliation commission is not due to release its findings on boundary demarcation until Sept. 19. Australia and Timor-Leste have agreed to 'good faith' behind-closed-doors discussions. The stated aim is to end the boundaries impasse to allow the splitting of some US$50 billion in Greater Sunrise revenue, pre-empting the conciliation commission findings.

But this is a complex task given concerns that a deal could open a can of worms in relation to sensitive maritime border issues with Indonesia.

Australia damaged its international standing, and relations with Timor-Leste, when it was revealed that Canberra was spying on its little neighbor during boundary treaty negotiations in 2006. Indonesia is sure to be following developments closely.

Even if the maritime boundaries can be settled and a plan forged to develop Greater Sunrise, if runaway expenditure continues unabated it would create a budgetary black hole. National bankruptcy within a decade constitutes a worst-case scenario.

Migration of young people from Timor-Leste to work elsewhere in Asia, Australia or Europe constitutes a community safety valve of sorts, but expectations have been raised with election spruiking that oil and gas income will further lift living standards. A harsher reality of future austerity programs in a volatile society would stir resentment.

Transitioning from petroleum export dependency to what is branded 'sustainable, equitable development' is fraught with potential pitfalls, not least the tendency to divert funds into grandiose projects that line the pockets of political elites. If the elephant in the room morphs into 'white elephants' many of Timor-Leste's 1.2 million inhabitants will face tough times.

Stoicism in the face of a traumatic gestation and birth as an independent nation engendered international compassion. Some of the damage since has been self-inflicted, not least a violent flare-up in 2006-07 that saw a split in the military and violent rampages in the capital, Dili.

That the fourth, most recent, national parliamentary election and campaign was judged to be free, fair and violence-free is deserving of praise and hopefully is a good omen. That achievement was no accident, owing much to the forging of the unity government two years ago.

In the aftermath of the election, the onus on Timor-Leste's leaders is to simultaneously diversify the economy, including through sound infrastructure spending, while topping up the country's depleted sovereign wealth fund by harnessing hydrocarbons in the Greater Sunrise field. This will necessitate greater flexibility.

Time will herald a new generation of leaders, notably from the ranks of well-educated local technocrats who choose to remain in their homeland. And that is cause for hope.

Craig Skehan is a freelance journalist and a senior contributor for The Sydney Morning Herald and ucanews.com. He first visited Timor-Leste in 1999.