Refugees want guarantees of safety, citizenship and basic rights before returning to Myanmar from Bangladesh 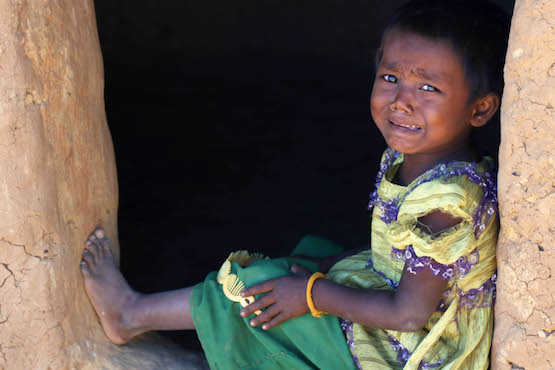 A Rohingya child cries in Kutupalong refugee camp in Cox's Bazar in Bangladesh, where about 400,000 refugees reside in squalid conditions after fleeing a deadly military crackdown in Myanmar. (Photo by Stephan Uttom/ucanews.com)

Officials in Bangladesh and Myanmar have responded positively to a delay in the repatriation of hundreds of thousands of Rohingya Muslims, while refugees in Bangladeshi camps and rights groups claim the planned process threatens refugees' security and well-being.

Bangladesh said on Jan. 22 that their repatriation to Myanmar would not start on Jan. 23 as planned because vital arrangements remained incomplete.

On Jan. 16, Bangladesh and Myanmar signed an agreement that provides details of a plan to repatriate over 770,000 mostly Rohingya Muslim refugees who have fled Myanmar's Rakhine State since October 2016.

Most refugees have fled to Bangladesh since late August last year following a brutal military crackdown in response to Rohingya militant attacks on security checkpoints in Rakhine on Aug. 25.

"The repatriation has three stages — setting up a framework, infrastructural arrangements and actual repatriation. We have completed the first stage and the second stage will require two to three weeks to complete," Abul Kalam, commissioner of Bangladesh's state-run Refugee Relief and Rehabilitation Commission, told ucanews.com.

"The number of refugees to be repatriated is large, so it is taking time to complete. Refugees will be put in transit camps near the border before return, so their food and security must be ensured before actual repatriation," Kalam said.

Refugees living in squalid camps in Cox's Bazar with minimal aid and basic services have been protesting against the start of repatriation without "concrete promises of citizenship and basic rights" in Myanmar since Jan. 19.

"The proposed process is not acceptable to refugees. Myanmar wants to put us in temporary camps but there is no mention of when we would be allowed to go back to our ancestral home and get back our property. There is no guarantee of our safety, citizenship and basic rights on our return. Without all these assurances, we don't want to go back," said Muhammad Saker, 20, a refugee from Balukhali camp who fled to Bangladesh from Buthidaung, Rakhine, in December 2016.

Muhammad Rezwan, 20, who arrived in Bangladesh in September 2017 from Maungdaw, Rakhine, had similar sentiments.

"At least in Bangladesh we are safe and living without fear of death. What good would it bring us if we get back to Myanmar without a promise of citizenship, basic rights and peaceful living?" he asked.

"We have lost our faith in Myanmar and we believe that without monitoring from the United Nations the repatriation would be useless and risky for refugees."

A view of Kutupalong refugee camp in Cox's Bazar in Bangladesh in December 2017. (Photo by Stephan Uttom/ucanews.com)

Myanmar says it is ready to accept Rohingya people as preparations have already been made.

Aung Min, director of the Rakhine State Immigration and Population Department, said it assigned staff to two reception centers on Jan. 17 to prepare for refugees.

"On our part, we are ready to accept the people as all preparations have been made," he told ucanews.com.

Aung Min said the repatriation process would be carried out five days a week and around 300 people would be accepted in two reception centers each day.

"Although the Bangladesh government hasn't contacted us regarding refugees' return, we have to continue working on the agreement Bangladesh and Myanmar have reached," Zaw Htay, director-general of State Counselor Aung San Suu Kyi's office, told Radio Free Asia on Jan. 22.

Under the agreement, Myanmar was due to start receiving Rohingya refugees from Bangladesh at two reception centers and a temporary camp near Maungdaw, northern Rakhine State, starting on Jan. 23 and continuing over the next two years.

Rohingya refugees who want to return to Myanmar will need to fill out a form that requires each head of a family to supply a Myanmar address for his father, mother and spouse along with a family photo and thumb prints for all family members.

Returnees will need to sign a document stating that their return is voluntary and they will abide by the laws of that country.

New York-based Human Rights Watch called for suspension of the bilateral plan as it "threatens the refugees' security and well-being."

"Rohingya refugees shouldn't be returned to camps guarded by the very same Burmese forces who forced them to flee massacres and gang rapes and torched villages," Asia director Brad Adams said on Jan. 23.

Adams said the repatriation plan appears to be "a public relations play" to hide the fact that Myanmar has not taken measures to ensure "safe and sustainable returns."