Officials in Vietnam seek cause of fish deaths 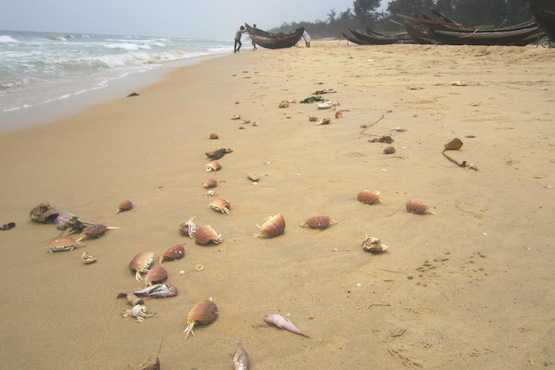 Fish in central Vietnam's coastal waters are dying and religious leaders and academics are calling on the government to find out why.

Local media have reported an estimated 70 tons of fish and 100 tons of clams have perished since early April.

Farms in the Vung An Economic Zone in Ha Tinh province, started to see fish dying on April 6, while dead fish began washing ashore along 200 kilometers of the coastal provinces of Ha Tinh, Quang Binh, Quang Tri and Thua Thien Hue on April 10.

The government must "quickly bring those who are poisoning the sea to justice, punish them severely and make them compensate victims adequately for environmental damages," said an online statement signed by more than 550 dissidents, intellectuals, former government officials and Catholics including Bishop Paul Nguyen Thai Hop of Vinh that covers the affected provinces of Ha Tinh and Quang Binh.

The statement was issued April 27, the same day Natural Resources and Environment Vice Minister Vo Tuan Nhan said the fish could have been killed by a toxic discharge caused by humans or "red tide," which occurs when algae blooms at an abnormal rate producing toxins.

Local media and public opinion blame a Taiwanese-built steel plant, a unit of Formosa Plastics, in Vung An economic zone, with poisoning the water. A drainage pipe connected to the facility discharges 10,240 cubic meters of toxic waste into the sea each day.

Public outrage mounts over the steel plant after Chou Chun Fan, the Taiwanese director of the plant, told the Tuoitre newspaper that Vietnam had to choose between catching fish and shrimp and having a modern steel plant. "You cannot have both," Chou said in Vietnamese.

Tuan said the government has yet to find evidence linking the steel plant to the mass fish deaths.

On May 1, thousands of demonstrators took to the streets across major cities in Vietnam in a rare public protest against Formosa Plastics. On April 29 and 30, fishermen in Quang Binh province scattered dead fish, nets and boats across national roads to protest government inaction.

Archbishop Paul Bui Van Doc of Ho Chi Minh City, president of the Bishops' Conference of Vietnam, appealed for calm, asking the protesters to avoid "extreme actions." he also called on Vietnamese Catholics to give generously to aid agencies providing help to the fishermen.

The statement also asked the government to punish officials who have failed to deal with the incident.

"The Vietnamese people do not choose economic development with the price of destroying the environment, poor people's interests and national sovereignty," they said. People do not acknowledge "rulers who are foolish and greedy and sell the nation at a low price for their own interests."

"Authorities should find out causes of the fish deaths and deal with the crisis soon. If not, we fishermen will die of starvation," he said.

*** This story was updated May 3, adding a new ninth and 10 paragraph.