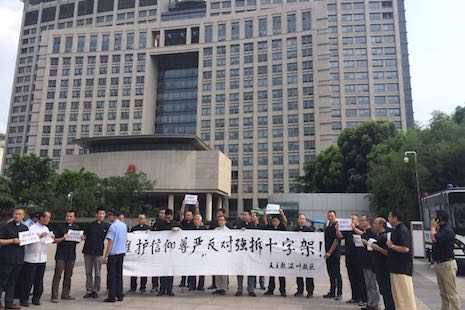 Chinese Bishop Vincent Zhu Weifang of Wenzhou was joined by 20 other priests in a protest outside government offices in Wenzhou city to stop the cross-removal campaign in Zhejiang province.

The appearance of Bishop Zhu, 89, who walks with a cane, leading the July 24 protest inspired many local Catholics, sources told ucanews.com.

“They were moved to see the bishop leading the struggle to retain the symbol of their faith,” a source said.

The protest lasted about two hours. Several police officers appeared at the scene but did not take action, according to eyewitnesses.

Church officials decided to stage the protest after holding a diocesan meeting earlier in the day.

Prior to the July 24 protest, eight clergy from Zhejiang sought help from Church officials in Beijing to lobby the government to stop the cross removal campaign, a source said.

Bishop Zhu issued an open letter last August, calling on Catholics to defend their rights and dignity in the face of the cross-removal campaign. Unlike their Protestant counterparts, today was the first time the Catholic Church took the cause to the streets.

Zhejiang has a Catholic population of 210,000 with Wenzhou diocese being the largest. Wenzhou is also a stronghold of the “unofficial” Church community with about 120,000 members.

Meanwhile, the unofficial Catholic community in Yongqiang area called on all parishes to pray and fast as a nonviolent protest for their right to celebrate their faith.