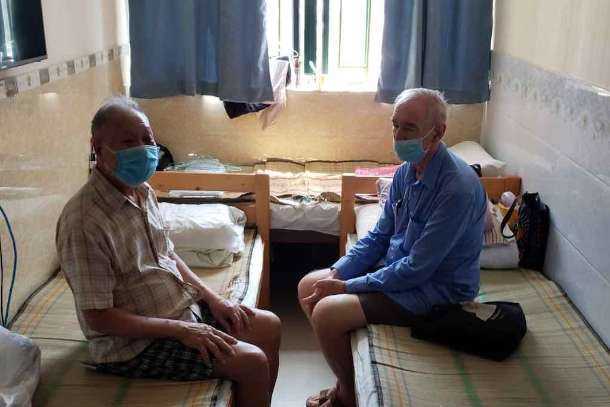 Father John Wotherspoon (blue shirt) sits with a homeless man after helping him find a rented apartment with two other people in Hong Kong. Hundreds of people are homeless in a city where accommodation is expensive. (Photo: UCA News)

For almost 10 years, Ah Ming slept in a public place in Hong Kong's airport. Last year, after authorities restricted entry only to staff and travelers, he began sleeping inside one of the 24-hour McDonald's restaurants.

But that luck did not last long for this 75-year-old man. He was forced to sleep on the streets after the Covid-19 pandemic hit the city and restrictions forced all 24-hour restaurants to close at night.

The restriction meant all McRefugees — homeless people sleeping inside 24-hour McDonald's restaurants — moved to the streets. Hundreds now live on underused footbridges or roadsides and use public toilets.

One such area in the city is Rest Garden in the Yau Ma Tei area of Kowloon district, where scores of homeless people live.

However, Ah Ming was fortunate to meet a Catholic priest who helped him find shared rented accommodation. Father John Wotherspoon of the Missionary Oblates of Mary Immaculate walks through the Yau Ma Tei area each day looking to help homeless people.

The former British colony has some 1,500 homeless people, according to a 2013 study, but people like Father Wotherspoon estimate that figure must be more than double now.

Housing in Hong Kong remains the most expensive in the world, with even a low-quality shared flat commanding a monthly rent of US$250-400 for a tiny amount of space.

A lack of affordable housing is a major reason for homelessness in the city. Father Wotherspoon said most homeless are elderly, unemployed and cannot find work because of mental or physical disabilities.

Some homeless people aged 60 and above receive US$440 a month as social welfare assistance from the government. Ah Ming and two such elderly people now share a flat that Father Wotherspoon arranged for them.

The priest is familiar to many because he has been trying to help McRefugees for more than a decade.

Father Wotherspoon said that each day several people come to him with the same question: "Father, do you have a place for me to sleep?"

After the government asked restaurants to close at night as part of the Covid-19 restrictions early this year, the priest launched a campaign to fund a resting place for the homeless.

The priest said some street sleepers own houses but rent them out and sleep in "free places" to generate income. But they are not a priority for him.

Ah Ming said spending nights in the airport was fine because "at least there is a shelter and a place to shower, and the food is only HK$20 per lunch box — for those of us who live on government subsidies, this is a good choice."

Elisa, a homeless woman who met the priest in hospital, said that Father Wotherspoon encouraged her to find a job so that she could live with more dignity.

The priest opened a second-hand shop with the donations he received at Temple Street, where many homeless people live. He named it MercyHK 2nd Hand Eco Shop.

Chan Chi Kong, a retiree who volunteers as the shop's chief executive officer, said the shop was set up with several objectives in mind. It helps homeless people buy necessities at a cheap rate rather than depending on donations. It can also enable the homeless to be self-reliant by working in the shop and earning a living.

Two homeless persons work in the shop sorting out goods.

However, Chan admits that efforts to employ more homeless people in the shop did not always work out as some of them used foul language to scold customers, while some even picked fights with others.

In August, the shop received clothes as donations from Catholic artists. It expects a profit of more than HK$63,000 (about US$8,100) through online marketing by August, he said.

Chan said the shop also provides opportunities for parishioners to do charitable work. Some people buy their favorite items from the shop as they are cheaper, he says.

"After all, this is a rundown area and having a church shop here gives us a chance to spread the message of the Gospel to them."