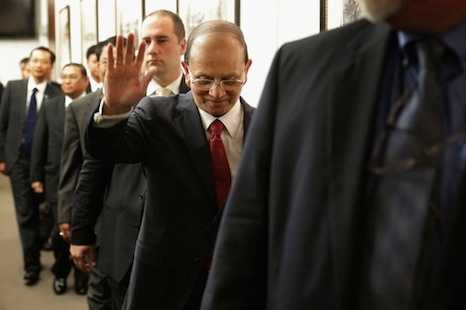 By Al Jazeera and agencies

Obama made the announcement on Monday following his meeting with Thein Sein, wherein he had expressed US concern about violence against Muslims in Myanmar.

Obama said he appreciates the Asian leader's efforts to lead the country in ``a long and sometimes difficult, but ultimately correct, path to follow'' toward democracy.

Sitting next to Obama in the Oval Office and speaking through an interpreter, Thein Sein said he was grateful for the invitation to discuss reforms and said Myanmar still has democratic processes to learn and significant challenges.

"It is a daunting task ahead of us,'' he said, noting in particular the widespread poverty in the country.

"We will need the assistance and understanding of the international community, including the United States,'' Thein Sein said.

In his remarks, Obama used "Myanmar'" the country name adopted by the junta in 1989. However, the US will keep using "Burma'' in official documents.

Thein Sein became the first leader of his country to visit the White House in nearly half  a century, as Washington offers a strong symbolic gesture to back his reforms.

As the two leaders met, a small crowd of protesters converged outside.

Critics say that Obama's invitation was premature and takes pressure off Myanmar to address still-alarming abuses such as recent anti-Muslim violence to which security forces allegedly turned a blind eye.

Al Jazeera's Alan Fisher, reporting from Washington D.C., called Thein Sein's visit as a significant step in the US relations with Myanmar.

Al Jazeera's Wayne Hay, reporting from Yangon, said there are many unresolved issues that Thein Sein and Obama needs to address during their meeting.

"There are a lot of people here who are hoping that some tough questions will be asked of President Thein Sein by President Obama," our correspondent said. That includes the ongoing conflict with rebels and attacks on Muslim communities by Buddhist majorities.

The most critical test of reform will come in 2015, when Myanmar is scheduled to hold elections -- testing whether the military and its allies would be willing to cede power, potentially to Suu Kyi.

Thein Sein did not budge on the constitution's allocation of 25 percent of seats in parliament to the armed forces, saying that the military had preserved Myanmar's independence.

"It is a defensive force. You cannot deny their place in politics," he said.

The army seized control of the country then known as Burma in 1962, ushering in decades of isolation.

Military ruler Ne Win in 1966 was the last leader to visit the White House, where he met president Lyndon Johnson.

Obama has made Myanmar a key priority and visited in November. To some, Myanmar represents the biggest success from his pledge in his 2009 inaugural address to reach out to US foes if they "unclench" their fists.

US officials argue that reforms by Thein Sein's quasi-military government - freeing democracy icon Aung San Suu Kyi and hundreds of political prisoners, scrapping censorship, legalising trade unions and protests - are transformative and deserve support from Obama, who confirmed the end of Myanmar's pariah status with the West with a landmark visit last November.

At least 192 people died last year in violence between ethnic Buddhists in Rakhine and Rohingya Muslims, who are denied citizenship by Myanmar. Most of the victims, and the 140,000 people made homeless in the attacks, were Muslims.

The Myanmar government's rights record has long been poor, especially in resource-rich areas inhabited by ethnic Shans, Karens and Kachins.