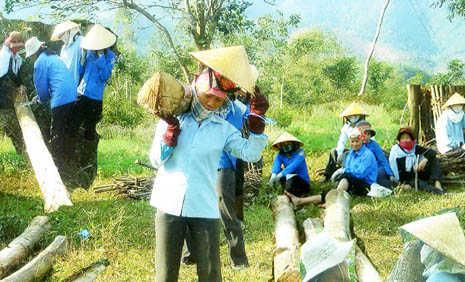 Nuns cut and carry wood and firewood for a living

Nuns from an indigenous congregation in northern Vietnam are toiling hard on construction sites, farms and in the sea to help support not just themselves, but also poor people. “Our mission is to live and do physical work among poor labors in order to earn a living and support underprivileged people,” said Sister Marie Nguyen Thi Mai, superior of the Congregation of Missionaries of Charity based in Quy Chinh parish in Nghe An province. Sister Mai, 45, said their daily work includes gathering firewood; diving in the sea to collect rocks; cultivating rice, sugar cane and other crops; raising cattle and poultry; and working on construction sites. “We make money to provide accommodation, food, medicine and an education to 1,600 orphans, children with physical disabilities and elderly people in many provinces,” she said. The work they do can be very physical, according to Sister Marie Nguyen Thi Huyen, who heads a community in Quang Thanh village Early each morning she and 20 other sisters walk five kilometers to a forest they planted in 1990 to cut firewood from eucalyptus trees and carry the bundles back home on their shoulders. “We earn 800,000-1,000,000 dong (US$42-48) a day from firewood,” Sister Huyen said. We’ve been doing this since for over 10 years, she added. By working hard, “We express our sympathy with the toil all the poor laborers endure,” the 30-year-old nun said. Sister Teresa Mai Thi Hong Chau, 34, said 14 nuns and novices in nearby Ky Loi village dive in the sea to collect black, purple, red and white rocks. They collect around 400-600 kilos per day and sell it to tile makers for 50,000 dong per 100 kilogram, she added. “Our feet and hands get cold and scratched by the rocks but we are happy to work and support ourselves and others,” Sister Chau said. Sister Chau said the nuns are also taking care of 32 orphans and children with physical disabilities. Many are abandoned by their parents at local markets or at the gates of the convent. There are also 52 elderly people without relatives or who have been abandoned to be taken care of at a house they run in the area. In addition to their other work, they also offer material support to single pregnant women and leprosy sufferers. The Congregation of Missionaries of Charity was established in 1980 by Vinh diocesan Father Joseph Nguyen Dang Dien. Its 600 nuns and novices live and work in 40 communities in Ha Noi, Ho Chi Minh City and in seven provinces. VT13620.1645