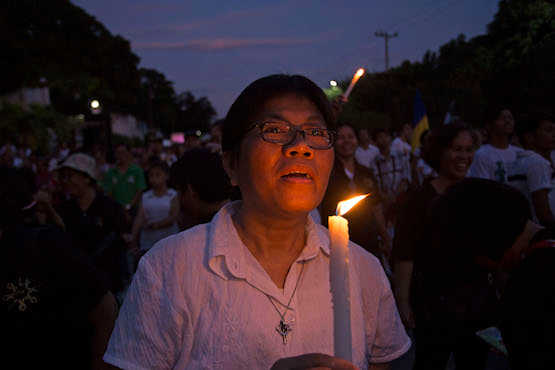 Sister Nenet Dano of the Religious of the Good Shepherd congregation takes part in a candle-lit procession to dramatize  people's opposition to the drug-related killings in the country. (Photo by Kimberly de la Cruz)

Sister Nenet Dano has been documenting cases of drug-related killings in a Manila district since the start of the deadly war against illegal drugs in the Philippines 19 months ago.

Of the 35 people killed in the district of San Andres, the Religious of the Good Shepherd nun has documented 28 of them and keeps the records in a diary.

Now, Sister Nenet's diary is subject to a summons by the Supreme Court to back a class action writ of amparo filed by families of victims of the killings and the community of San Andres.

A petition for a writ of amparo is a remedy available to any person whose right to life, liberty and security is violated or threatened.

Sister Nenet's story started months before she took her licensure examinations in social work. She prayed hard to pass, she admits.

Little did she know that her degree would be vital in documenting the government's war on drugs.

In July 2016, the nun heard about the story of Jefferson Bunuan, a 20-year-old student who wanted to be a policeman, and two others who were killed during a police anti-drug operation.

She went to Bunuan's wake. It became a life-changer for her. "Prayers are not enough," she would later say.

Together with friends, the nun started going to the wakes of suspected victims of drug-related killings to listen to the stories of the families.

During her visits, she would lead prayer sessions. She would later crack jokes with the families of the victims to help them open up, especially during debriefing sessions.

The nun says her diary keeps her grounded and has become her tool to maintain her sanity.

The notes, observations, recollections of families and witnesses of those who were killed or arrested that were written in Sister Nenet's diary form part of the basis of the court petition filed by San Andres residents.

In an affidavit she provided, the nun gives details of the killings she documented, including official records she collected from families, records that also came from the police.

She notes inconsistencies in police reports, ballistic reports, and evidence logs where time stamps and serial numbers of guns are not consistent.

Families and victims also filed affidavits recounting how the killings affected the lives of residents and how the families of the victims continue to live in fear as they try to cope with grief.

Sister Nenet says the petition filed before the court will give people peace and make them realize that they have rights that should be asserted.

People, however, fear a backlash from authorities, especially from the police who are suspected of killing thousands of suspected drug users and peddlers.

Rosie Matio, a lay partner of Sister Nenet's congregation, revealed that policemen visited her one night and tried to convince her to sign an affidavit saying the killings were legitimate. She refused.

"There is fear, but you have to fight it because nothing would come out of it. You just need a bit of courage and prayer," Matio said.

There are many challenges being faced by those who fight the war on drugs on the ground.

Sister Nenet believes that people can change, and drug dependents only want to feel that they are also important.

The petition before the court is the fruit of the community's collective prayers, she says. "We prayed that there is something that we can do."

In front of the altar in the community chapel, a banner that reads, "Stop the Killings and Start the Healing" is displayed.

Every week, Sister Nenet leads victims' families to pray. They light candles in front of the Blessed Sacrament, and offer prayers in silence.

The nun says Catholics should be defenders of life, "even for evil ones" who should be given the chance to change.

Her diary gives her the chance to defend life. Sister Nenet says others can too even in the smallest ways.