Nuns charged with covering up rape of minor girl

After a priest allegedly raped a girl, more church officials have been accused of not reporting the crime 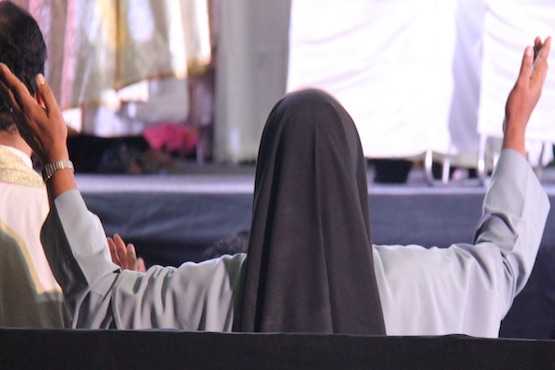 A Catholic nun from the southern Indian state of Kerala praying in a church in this ucanews.com file photo.

Seven more people, including five Catholic nuns, were charged for trying to hide the rape of a minor allegedly by a Catholic priest, in a scandal that continues to rattle the church in the southern Indian state of Kerala.

The seven, all connected with a church-run orphanage and hospital, are accused of not reporting to police that a 17-year-old girl, a minor according to Indian law, had given birth Feb. 17.

N. Sunil Kumar, the investigating officer, told ucanews.com that all the newly accused absconded soon after the priest was arrested "but police have launched a man-hunt."

They will be charged under stringent sections of the Protection of Children from Sexual Offences Act and Juvenile Justice Act that do not allow for bail, the officer said.

The accused are the administrator, gynecologist and pediatrician of the church-run Christu Raj Hospital where the baby was delivered. Two more nuns from the orphanage where the baby and mother were cared for; another nun from a nearby convent and a Mother’s Forum official, were those charged.

The teenager was a student at the church-run school under the management of Father Vadakkumchery. She was raped at the parish house, according to the police.

The diocese suspended the priest after his arrest and Bishop Jose Porunnedam apologized to the girl and her family in a message to the parish.

"I endure your pain and agony. And I am also in pain," the bishop said. "The loss of self-respect and spiritual damage caused to the church by this incident is huge. I don’t know how to pacify the child and her parents. I too join in their tears. I can only apologize to you," the bishop said.

The parishioners are in a state of shock. A section of them said that church officials are still helping those who have absconded.  C.F. Thomas, a parishioner, said diocesan officials are helping them file petitions for anticipatory bail.

George Joseph, a retired superintendent of police, said the diocese has an obligation to legally help its members because they "have no knowledge about legal matters."

However, Cardinal George Alencherry of Ernakulam-Angamalay, who is based in Kerala, told the local language media that the church "would not protect any member of the clergy involved in the case under any circumstances."

"The incident cannot be tolerated. All the accused in the case should be punished under the law of the land. The church will not make any attempt to protect the offenders," he said.