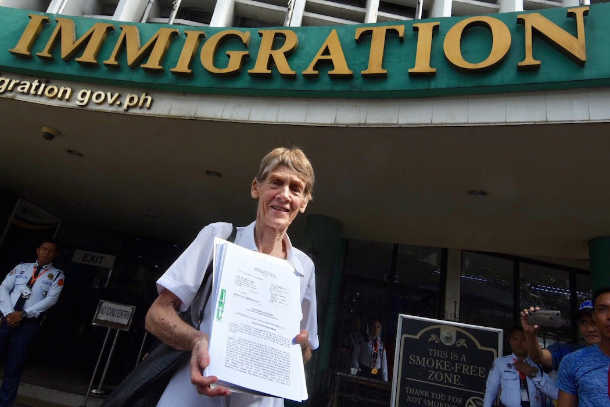 An Australian nun ordered deported by Philippine authorities has called on the country's Catholic bishops to clarify an agreement they signed with the Bureau of Immigration aimed at making the application and renewal of missionary visas easier.

Sister Patricia Fox, whose request for a missionary visa was denied this week, said the bishops should come out with a "clear statement" about the deal.

"I think the bishops need to clarify these [issues on] endorsements," said the nun at a forum in Quezon City on Sept. 19.

"I think it is an issue that the church has to look into," she said, adding that church leaders need to clarify the issue because it will affect foreign missionaries.

The agreement was signed in June.

It states that the bureau "recognize[s] that foreign Catholic missionaries have contributed immensely to the moral and human development of the citizenry."

The bishops' conference is supposed to endorse foreign missionaries, religious, and lay people for their visa applications.

Sister Fox, however, said the agreement should be reviewed following after her application to extend her missionary visa was turned down on Sept. 16.

The immigration bureau said the nun had already spent 27 years in the country as a missionary, contrary to what is provided in the agreement that "foreign missionaries stay in the country for only 10 years."

Sister Fox's lawyers, however, said the agreement did not preclude the extension or renewal of a missionary visa for another ten years.

When rejecting her application the bureau also cited the deportation order issued previously against her.

"The [immigration bureau] already concluded that Sister Fox violated the conditions of her stay and is considered undesirable, hence a deportation order was previously issued against her," said bureau spokeswoman Dana Krizia Sandoval.

"Our legal team believe that approving the extension of her missionary visa will be inconsistent with the findings cited in her deportation order," she said.

Sister Fox said she would appeal.

Immigration officials arrested the nun on April 16 for supposedly "joining rallies." The next day, she was released for further investigation after it was discovered she had a valid missionary visa.

President Rodrigo Duterte later acknowledged that he had ordered the nun to be investigated because of her supposed "disorderly conduct."

On Sept. 18, Sister Fox testified against the Duterte government before an international tribunal, regarding the alleged political persecution she had experienced.

Kathy Panguban, one of the missionary's lawyers, presented a video recording of her testimony before the International People's Tribunal convened by lawyers and rights groups in Brussels.

The nun said the political activities that resulted in her being declared an "undesirable alien" were part of being a religious.

"As a human being, especially as a religious, we have to stand with the oppressed and what I was doing was listening to ... the workers who are just asking to be [regularized] ... the tribal people who are being sent off their land," she said.

The 71-year-old nun is still contesting her deportation order before the Department of Justice.