Number of Rohingya trying to flee by boat from Myanmar escalates 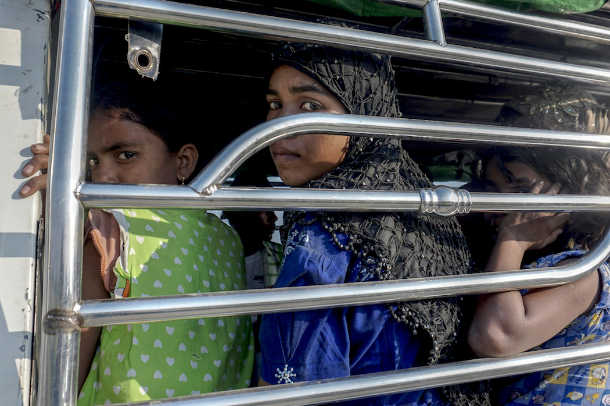 Rohingya women ride a police vehicle in Kyauktan township south of Yangon on Nov. 16 after their boat washed ashore. They were among Rohingya who left a camp in Myanmar's Rakhine State in a failed attempt to sail to Malaysia. (Photo by Hla-Hla Htay/AFP)

The recent discovery of a boatload of 100 plus Rohingya from Rakhine State washed ashore on the southern coast of Myanmar has upped concerns of another refugee boat crisis.

Myanmar's officials found a boat carrying 50 men, 31 women and 25 children south of Yangon on Nov. 16. They had spent 15 days at sea in a wooden boat that had run out of fuel and were bound for Malaysia.

Officials returned the Rohingya to Rakhine Sate on Nov. 18, according to Rohingya sources.

Police shot and injured four Rohingya men in Ah Nauk Ye camp in Pauktaw township, Rakhine State, on Nov. 18 in an action related to the failed boat voyage. Two men have been arrested suspected of owning the boat used.

More than 120,000 Rohingya remain in squalid camps in apartheid-like conditions in central Rakhine State since deadly violence erupted there in 2012. Sources told ucanews.com that boatloads of Rohingya refugees have been leaving the coasts of both Rakhine State and Bangladesh.

"Around 10 or 20 people from some families have boarded with small boats and they quietly left the camps from central Rakhine," Aung Win told ucanews.com.

Kyaw Hla Aung, a displaced Rohingya from Thetkaepyin camp near Sittwe, said many want to flee to Malaysia.

"People here remain restricted in their freedom of movement and there are no jobs, so they take the option of leaving for Malaysia looking for work," Kyaw Hla Aung told ucanews.com.

In overcrowded and unsafe vessels, tens of thousands of Rohingya have in the past fled Rakhine State and headed for Malaysia, Indonesia and Thailand. This picture taken on May 14, 2015, shows Rohingya migrants on a boat drifting in Thai waters off the southern island of Koh Lipe in the Andaman Sea. (Photo by Christophe Archambault/AFP)

More than 700,000 Rohingya fled to Bangladesh to escape a Myanmar military crackdown in Rakhine State that began in August 2017. A United Nations fact-finding mission in mid-September found that the Myanmar military's persecution of the Rohingya in Rakhine amounted to genocide.

"If not, another boat crisis of refugees from Myanmar may be in the near future," Robertson said in a Nov. 17 tweet.