Nuclear weapons are a crime against God and humanity

The indiscriminate killing of civilians merits 'unequivocal and unhesitating condemnation' 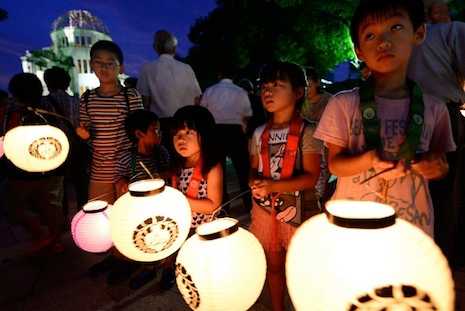 "Any act of war aimed indiscriminately at the destruction of entire cities or of extensive areas along with their population is a crime against God and man himself. It merits unequivocal and unhesitating condemnation" (Gaudium et Spes, "Pastoral Constitution on the Church in the Modern World," Second Vatican Council).

On August 6, 1945, a US Boeing B-29 Superfortress bomber dropped an atomic bomb on Hiroshima, Japan, immediately killing 70,000 people – mostly civilians – and obliterated more than 4 square miles of the city.

On August 9, 1945, the US dropped a second atomic bomb, this time on the Japanese city of Nagasaki, killing between 35,000 and 40,000 people – again mostly civilians – and leveling almost 2 square miles. At the time of the atomic blast, Nagasaki was the heart and soul of Catholicism in Japan.

These bombings were indiscriminate acts of destruction and death – crimes against God and man himself, and therefore, merit unequivocal and unhesitating condemnation.

Yet many Catholics ignore church teaching here and argue the atomic bombing of those cities was necessary.

"The use of this barbarous weapon at Hiroshima and Nagasaki was of no material assistance in our war against Japan," Leahy wrote in his memoir. "The Japanese were already defeated and ready to surrender. In being the first to use it, we adopted an ethical standard common to barbarians of the Dark Ages. Wars cannot be won by destroying women and children."

Catholic moral theology is crystal clear here: The end never justifies the means. Even if the final goal is morally good, the means used to accomplish that good must also be morally good.

The possession, modernization, targeting and, of course, the use of nuclear weapons is an evil means – gravely immoral.

What the world's Catholic bishops at Vatican II taught here is worth repeating: "Any act of war aimed indiscriminately at the destruction of entire cities or of extensive areas along with their population is a crime against God and man himself. It merits unequivocal and unhesitating condemnation."

Sadly, we have not learned the tragic lessons of history here.

Our nuclear arsenal is far more dangerous than it was in 1945. Today's strategic nuclear weapons are much more destructive.

Furthermore, the number of nuclear weapons in America's arsenal has increased from two in 1945 to the estimated current number of 7,700, according to the Federation of American Scientists (FAS), a nonpartisan think tank that provides analysis and recommendations on national and international security issues.

According to FAS, the total number of nuclear weapons in the world, split among nine countries, is approximately 17,300. Russia's nuclear arsenal is the largest, with 8,500 weapons.

Although treaties have reduced the number of nuclear weapons, the United States and other nuclear states continue to modernize their nuclear arsenals and show no desire to truly eliminate them.

FAS warns that approximately 1,800 Russian and American nuclear weapons are on dangerous high alert and are ready to be launched within minutes.

When near-accidental launches, the increasing possibility of terrorists acquiring small but highly dangerous nuclear weapons, and the likelihood of more nations joining the infamous nuclear club are also considered, it defies logic not to work hard for verifiable worldwide nuclear disarmament.

Full story: Nuclear weapons: a crime against God and humanity