The Covid-19 crisis is compounding the isolated country's systemic, institutional and economic challenges 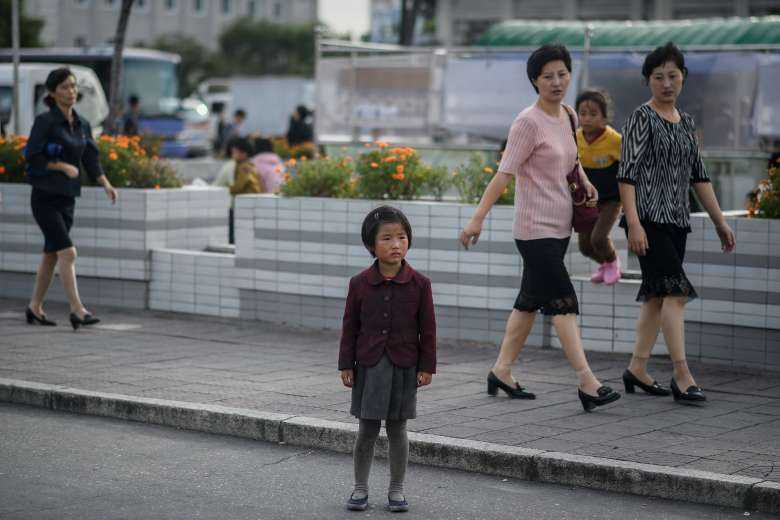 A child stands on a roadside in Pyongyang, North Korea. (Photo: Ed Jones/AFP)

Behind its self-imposed coronavirus barricade, North Korea is more isolated than ever and authorities are reinforcing loyalty to the regime in the face of desperate times, analysts say.

The impoverished country — which is under multiple sets of international sanctions over its nuclear weapons and ballistic missile programmes — has long struggled to feed itself, suffering chronic food shortages.

The North was the first country to impose a strict lockdown when it sealed its border in January last year to stop the virus spreading from neighboring China, where it first emerged before sweeping the world.

Pyongyang insists it has yet to see any cases of the virus — a claim that analysts doubt — but it has paid a huge economic price for the blockade, with leader Kim Jong-un admitting his people's hardships and warning them to buckle down for the "worst-ever situation."

Trade with China, the North's economic lifeline, has plunged to a trickle.

While the door has been opened a crack in recent months — with Chinese customs figures showing the North importing US$29 million worth of goods in April, more than double the March amount — it remains at a fraction of pre-Covid levels.

"Pyongyang had been in dire straits long before the pandemic," said Soo Kim, a former CIA analyst now with the RAND Corporation.

All international United Nations staff and foreign aid workers have left in the face of tight restrictions.

Several UN relief groups confirmed to AFP that the Needs and Priorities document — a key report that summarises the humanitarian situation in the country and forms the basis of UN appeals — will not be published this year.

The coordinated decision was reached "in the absence of field assessment and monitoring due to Covid-19-related movement restrictions," said Edwin Salvador, the World Health Organization Representative to Pyongyang.

The impacts of the pandemic have "most likely exacerbated" the humanitarian situation in the North, with some 10.6 million people in need, a spokesperson for the UN Office for the Coordination of Humanitarian Affairs (OCHA) said.

The World Food Programme, which has by far the largest international aid presence in the country, has warned it could cease operations this year in the absence of food imports.

In a rare admission of hardship, Kim in April called on his officials to "wage another, more difficult 'Arduous March' in order to relieve our people of the difficulty, even a little."

The "Arduous March" is a North Korean term for the 1990s famine that killed hundreds of thousands of people when the fall of the Soviet Union left it without crucial support.

The allusion was aimed at motivating people to "push through adversities" and work for the "survival of the nation," said Gianluca Spezza, an associate research fellow at the Institute for Security and Development Policy in Stockholm.

"If the history of North Korea has taught us anything, it is that the peculiar nature of North Korea nationalism makes the DPRK 'thrive' during the harshest times," he added, using the initials of the North's official name.

In recent months Kim has issued a series of lengthy letters to regime organisations such as the Youth League and the trade union federation hailing them for carrying the "baton of loyalty and patriotism," according to the KCNA news agency.

State media have also carried a dozen reports since March highlighting hundreds of young people — sometimes orphans — "volunteering" to take up manual labour for the state, reverting to a style of propaganda from years gone past.

"Youths lining up to volunteer to work in mines is certainly Pyongyang asserting its identity to the wider world, even if outsiders view these things as systematic human rights violations," said Michael Madden, a fellow at the Stimson Center.

Kim is also seeking to root out "criminal" youths tarnished by foreign influences that are "dangerous poisons" to state ideology amid reports of North Korean teens enjoying southern television shows, movies and music.

In his Youth League letter, the leader decried the "words and acts, hairstyles and attire of young people" and said a nationwide "large-scale clean-up operation" was underway.

Pyongyang was looking to indoctrinate the younger generation, who experienced the Arduous March only as children, Madden said.

It was "adjusting their expectations of their material and cultural lives in the DPRK" and "lining them closer to the party, to the regime and less reliant on things like markets and South Korean television shows".

But at the same time, analysts note, the virus enables Pyongyang to disclaim accountability for its economic travails.

Go Myong-hyun of the Asan Institute of Policy Studies said: "North Korean authorities can blame the virus for whatever problems that existed long before the outbreak."