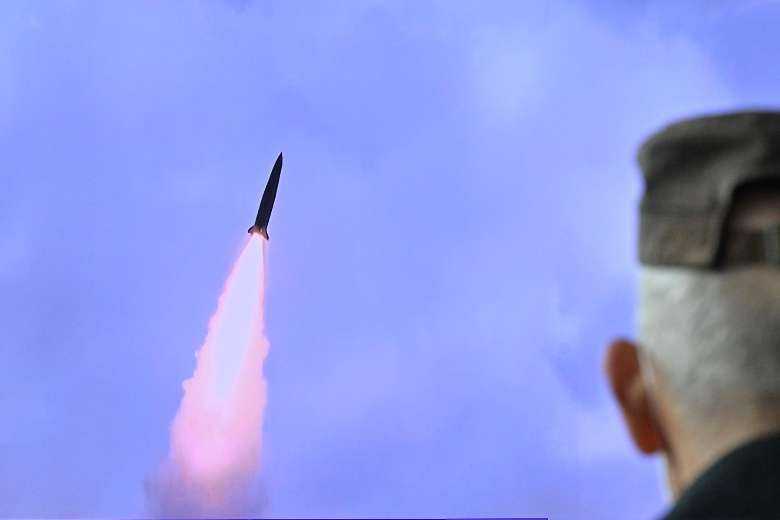 A man watches a television report with file footage of a North Korean missile test in Seoul on Oct. 19 after the South's military said a North Korean weapons test was believed to be a submarine-launched ballistic missile. (Photo: AFP)

North Korea fired a suspected submarine-launched ballistic missile into the sea today, the South's military said, the nuclear-armed country's latest advance in weapons technology and one that could give it a second-strike capability.

The test came with both Koreas building up their weapon capabilities in what could become an arms race on the peninsula, and with the Washington-Pyongyang dialogue at a standstill.

The "short-range ballistic missile suspected to be an SLBM" was fired from Sinpo into the sea east of the peninsula, Seoul's Joint Chiefs of Staff said in a statement.

Sinpo is a major naval shipyard with satellite photographs previously showing submarines at the facility, and the statement added: "South Korean and US intelligence are closely analysing for additional detail."

The key question will be whether it was fired from a working submarine or an underwater platform or barge.

A proven submarine-based missile capability would take the North's arsenal to a new level, allowing deployment far beyond the Korean peninsula and a second-strike capability in the event of an attack on its military bases.

North Korea is banned from developing nuclear weapons and ballistic missiles under UN Security Council resolutions, and is subject to multiple sets of sanctions as a result.

Pyongyang is known to be developing an SLBM and has carried out two previous underwater launches in 2016 and 2019, although the Pentagon and analysts say those were likely to have been from a submerged platform with the system in its early stages.

"The Kim (Jong Un) regime is developing submarine-launched ballistic missiles because it wants a more survivable nuclear deterrent able to blackmail its neighbours and the United States," said Leif-Eric Easley, a professor at Ewha University in Seoul.

"North Korea's SLBM is probably far from being operationally deployed with a nuclear warhead," he cautioned, "but Kim cannot politically afford appearing to fall behind in a regional arms race."

South Korea last month tested its first SLBM, putting it among the elite group of nations that have demonstrated proven technology, and also unveiled a supersonic cruise missile.

Today's launch comes after North Korea -- which invaded its neighbour in 1950 -- in recent weeks tested a long-range cruise missile, a train-launched weapon and what it said was a hypersonic warhead, sparking global concern.

Pyongyang says it needs its arsenal to defend itself against a possible US invasion.

Opening the weapons exhibition, leader Kim Jong Un -- who has overseen rapid progress in the North's military technology -- blamed Washington for tensions, dismissing US assertions that it does not have hostile intentions.

"The fundamental reason for the North's provocation is because the US is not changing its position on talks," Shin Beom-chul, a researcher at the Korea Research Institute for National Strategy, told AFP.

"Pyongyang is trying to demonstrate that it can carry out a bigger provocation."

Pyongyang's latest move came with Avril Haines, the US director of national intelligence, visiting Seoul for a three-way meeting with her South Korean and Japanese counterparts on North Korea today, according to reports.

It also followed US envoy Sung Kim renewing his appeal for talks.

"We harbour no hostile intent toward the DPRK and we are hopeful to meeting with them without conditions," he said following talks with his South Korean counterpart in Washington.

South Korean President Moon Jae-in is pressing for a formal declaration that the Korean War is over -- hostilities ceased in 1953 with an armistice rather than a peace treaty -- before his term ends next year.

Kim met three times with former US president Donald Trump, who boasted of stopping a war but failed to reach a comprehensive agreement on ending North Korea's nuclear programme.

The talks process has been largely at a standstill since a second meeting in Hanoi the following year collapsed over sanctions relief and what Pyongyang would be willing to give up in return.

In 2017, the North tested missiles that can reach the whole of the continental United States and carried out its most powerful nuclear explosion to date.