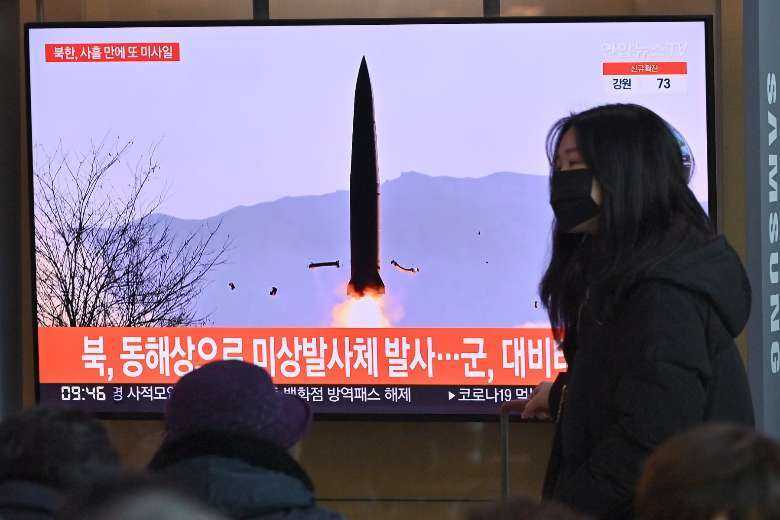 A woman walks past a television screen showing a news broadcast with file footage of a North Korean missile test at a railway station in Seoul on Jan. 17. (Photo: AFP)

Despite biting international sanctions, Pyongyang has conducted a string of weapons tests this year, including of hypersonic missiles, as leader Kim Jong Un pursues his avowed goal of further strengthening the military.

Reeling economically from a self-imposed coronavirus blockade, impoverished North Korea has not responded to Washington's offers of talks, while doubling down on weapons tests and vowing a "stronger and certain" response to any attempts to rein it in.

The launches come at a delicate time in the region, with North Korea's sole major ally China set to host the Winter Olympics next month and South Korea gearing up for a presidential election in March.

It needs to present something to North Koreans. It now has become clear that it will be difficult for the North to score on the economic side

Pyongyang said it successfully tested hypersonic gliding missiles on Jan. 5 and Jan. 11, with the second launch personally supervised by Kim.

A North Korean foreign ministry spokesman described the move as a "provocation", according to state news agency KCNA.

If "the US adopts such a confrontational stance, the DPRK will be forced to take stronger and certain reaction to it", the spokesman said hours before Pyongyang fired two train-launched missiles Friday.

Analysts said the Monday test also appeared to be an attempt to send the United States a message.

"It is signalling that it will forge ahead with tests despite criticism," Hong Min of the Korea Institute for National Unification in Seoul told AFP.

Hypersonic missiles are a top priority in Pyongyang's new five-year defence development plan, unveiled in January 2021, which it has pursued while dialogue with the United States remained stalled.

With the country battling major economic hardship domestically after years of Covid-induced isolation, Pyongyang may be looking to offer citizens a military victory ahead of key domestic anniversaries.

"It needs to present something to North Koreans," said Cheong Seong-chang of the Center for North Korea Studies at the Sejong Institute. "It now has become clear that it will be difficult for the North to score on the economic side."

This weekend, a North Korean freight train crossed the Yalu River railroad bridge into China for the first time in over a year, according to the Yonhap news agency.

The move could signal the prospect of resumed China-North Korea land trade, which has been suspended since the start of the pandemic in early 2020.

It is likely the missile launches will ease off ahead of the start of the Beijing Winter Olympics, said Yang Moo-jin of the University of North Korean Studies.

"As stability on the peninsula is a prerequisite for the successful Beijing Olympics, the North will not cross a red line," Yang said.