After Beijing, they will next meet in Pyongyang to discuss peace in the Korean peninsula 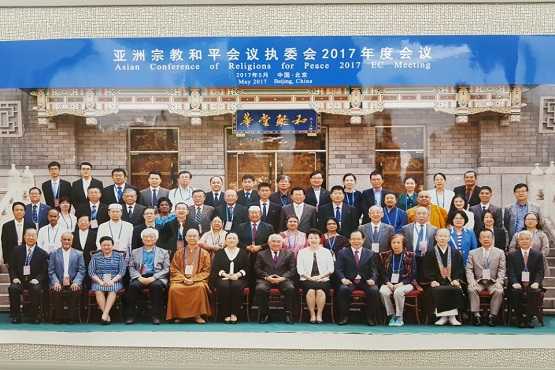 Participants at the Asian Conference of Religions for Peace. During the meeting, North and South Korean interfaith leaders agreed to meet in Pyongyang on June 17-20. (Photo by The Catholic Times of Korea)

Various religious leaders from North and South Korea met in Beijing and decided to further extend their dialogue by meeting in Pyongyang, North Korea in June.

The Korean Conference of Religion for Peace (KCRP) announced on May 26 that North and South Korean religious leaders would meet in Pyongyang on June 17-20.

The decision to bring spiritual people from the rival countries together came from the execution committee meeting of the Asian Conference of Religions for Peace which was held on May 18-22 in Beijing.

Members of the KCRP and Kang Ji-young, president of the [North] Korean Religious Association attended the meeting. They reaffirmed the need for reconciliation and peace in the Korean peninsula and for the resumption of the inter-Korean exchange.

To this end, they decided to hold a North and South Korean religious exchange meeting in the North Korean capital. Currently, the KCRP is discussing the matter with newly elected President Moon Jae-in.

Archbishop Hyginus Kim Hee-joong of Kwangju, co-chairperson of the KCRP, welcomed the upcoming meeting. "Dialogue is the most effective way to solve a problem. We need to meet as [much] as possible," he said.