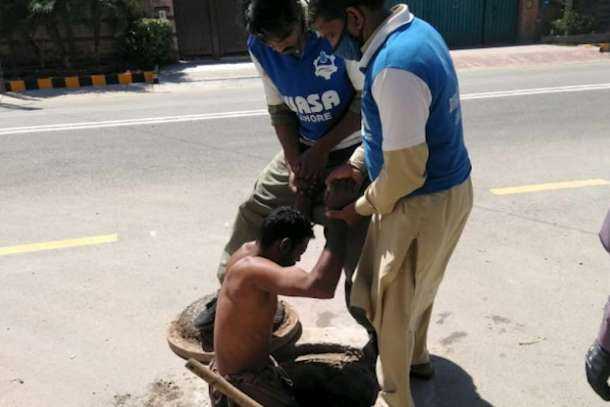 Water and Sanitation Agency Lahore workers pull a Christian sanitary worker out of a manhole. (Photo supplied by Shafique Masih)

A human rights group has slammed the government of Pakistan’s Sindh province for a job advertisement that invited applications from non-Muslims for a sanitation post.

The Karachi-based government job advertisement was published in widely circulated Urdu newspaper Jang on Sept. 2. Among other posts, the job specified only “non-Muslims” for the post of sanitary worker.

“HRCP [Human Rights Commission of Pakistan] deplores the continuing practice of advertising posts that specify that #religiousminorities should apply for sanitation jobs,” the rights body said in a statement on Sept. 3.

“Such ads infringe on human dignity and violate the constitutional guarantee of equality for all citizens because they deem religious minorities as only fit for work that is traditionally looked down on.”

It also called on the Sindh government to recall the advert and ensure that religious minorities are encouraged to apply for any post they wish.

This is not the first time that Christian activists and rights groups have pointed out what they describe as a discriminatory job policy that further marginalizes and belittles the country’s tiny minority population.

In June last year, the Pakistan army was forced to pull a job advertisement seeking applications only from Christians for sanitation jobs after social media outrage from religious minorities.

According to World Watch Monitor, an organization tracking persecution of Christians worldwide, the minority representation in sanitation jobs in Pakistan is over 80 percent even though Christians constitute just 2 percent of the population.

As a result of this continued practice in many parts of the country, many in Pakistan refer to Christians as Churha (dirty), a highly offensive and derogatory term.