Nobody in the crosshairs for Thai massacre

A decade on from the gunning down of pro-democracy protesters, there is little hope of justice Thai soldiers take positions near the Red Shirts’ camp in Bangkok on May 19, 2010. Many unarmed protesters were shot dead in the military crackdown. (Photo: Manan Vatsayana/AFP)

After a decade of waiting, relatives of pro-democracy protesters who were gunned down by the Thai army in Bangkok have yet to see any justice done.

“Sadly, the government of Prime Minister Gen. Prayut Chan-o-cha, just like its predecessors, has no answers for those demanding justice for at least 98 people killed and more than 2,000 injured between April and May 2010,” Sunai Phasuk, a senior researcher at the Asia Division of Human Rights Watch, said last week.

Rights activists like Sunai say the lack of action is yet another example of Thailand’s deeply entrenched culture of impunity whereby the military and powerful individuals can literally get away with murder.

“In the decade since, the authorities have conducted no serious investigations to prosecute government officials responsible for crimes,” Sunai went on. “While protest leaders and their supporters have faced serious criminal charges, successive Thai governments have made paltry efforts to hold policymakers, commanding officers and soldiers accountable.”

A Thai army spokesman has confirmed that no soldier has ever been charged over the deaths of scores of unarmed protesters who belonged to a grassroots movement that called itself the United Front for Democracy against Dictatorship.

During a bloody crackdown that saw the use of army snipers in areas declared “live-fire zones” by the military, dozens of civilians were killed at several locations in mid-May around central Bangkok. The massacre followed a deadly skirmish a month previously at Bangkok’s Democracy Monument.

Eyewitnesses at the time reported seeing heavily armed soldiers shoot unarmed protesters, even inside a Buddhist temple where hundreds of civilians had sought shelter during the unfolding massacre. 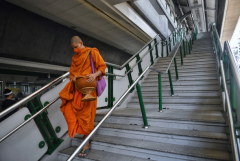 Despite the available evidence, the Thai army has denied shooting unarmed civilians, blaming mysterious armed protesters for the deaths. However, over the past decade the military has failed to produce any convincing evidence of this claim.

Instead, army chiefs have called for a form of self-induced national amnesia about the bloody events in the interest of “national unity, peace and reconciliation.”

The massacre of protesters in mid-May of 2010 ensued after heavily armed military units had encircled a protest site occupied by tens of thousands of peaceful protesters, including women, elderly people and even children, who had been camping out in central Bangkok for months.

The protesters, popularly dubbed the Red Shirts for the color of their clothing, had been calling for new elections during raucous rallies in a bid to unseat the government of then prime minister Abhisit Vejjajiva.

The then leader of Thailand’s pro-establishment Democrat Party, Abhisit was appointed prime minister in December 2008 after a democratically elected government headed by the People's Power Party was disbanded by a court on grounds that the party’s leader violated a law by hosting a cooking show on television. Independent observers saw the disbandment of the widely popular party as politically motivated.

In May 2010, Abhisit ordered the military to disperse unarmed protesters, most of whom had come from rural communities in the northeast. The subsequent military assault was spearheaded in part by Prayut, who went on to seize power from another elected government in a coup in 2014 and remains in charge of the government six years later.

Abhisit says he feels “a deep sadness” over the bloodshed, according to an interview published on May 17 by the Bangkok Post newspaper. However, he did not take responsibility for any of the deaths, saying that “we should not be driven by a preconceived goal to trade accusations.”

Over the past two weeks several illuminations with details of the bloodshed were projected by unknown pro-democracy activists onto government buildings and buildings at the site of the massacre in 2010.

The projections have been part of a popular online campaign that seeks to shed light on what happened in May 2010 and reveal the real perpetrators of the bloodshed under the hashtag #FindingTruth.

Thai authorities have warned that they might launch legal cases against the people behind the illuminations for making false accusations and disturbing the peace.

Meanwhile, rights activists say that the 10th anniversary of the massacre is a stark reminder that justice may never be done. A lack of accountability will continue, adding to the grief of the relatives of victims while serving the status quo of official impunity in Thailand.

“Hope for impartial justice fades with each passing year,” warns Sunai of Human Rights Watch. “This is not only a great injustice for the victims and their families but also sends a message to all Thais that there is little to protect them from government atrocities in the future,” he says.