No word from Vietnam over detention of pro-democracy activists

One of them, Chau Van Kham, a retired Australian businessman, is in need of medical attention 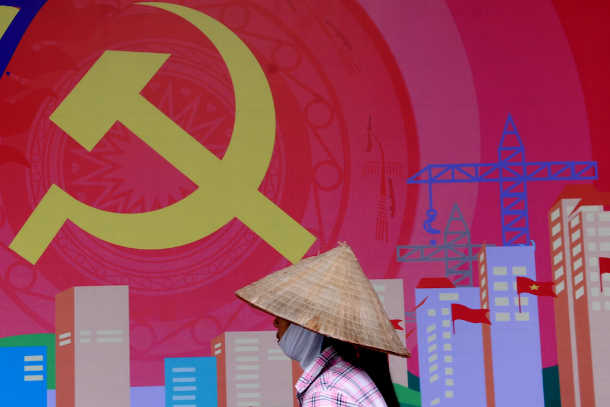 A file image of a street vendor walking past a poster marking an anniversary of the foundation of the Vietnamese Communist Party in downtown Hanoi. (Photo by Hoang Dinh Nam/AFP)

The Vietnamese Communist Party has a long history of ruthlessly jailing critics who challenge its dictatorial rule. It’s a fate the families of Chau Van Kham and Nguyen Van Vien fear has befallen the two pro-democracy activists.

Kham, 70, a retired Australian businessman and native Vietnamese, was perhaps tempting fate. His work for Viet Tan, a pro-democracy group branded a terrorist outfit by Hanoi, was well known.

Friends and family in Sydney said he had traveled overland through Cambodia to Ho Chi Minh City where he would undertake a “human rights fact-finding mission" but he was detained alongside 47-year-old Vien, a prominent activist from the banned Brotherhood for Democracy, on Jan. 13.

“We are mindful that the Vietnamese police have a history of framing peaceful activists with fabricated charges,” Phong Nguyen, a Viet Tan spokesman said. “His family are very concerned because of his ill-health. He needs regular medication because of his prostate.”

Brotherhood for Democracy called for their immediate release, adding the arrests were illegal and that Vien’s wife had been threatened by security agents during a search of the family home.

In Canberra, the Department of Foreign Affairs and Trade (DFAT) confirmed consular access to an Australian man detained in Vietnam had been sought, but for privacy reasons no further details were provided. Phong said he remained in close contact with DFAT.

Typically, the Vietnamese government has not said a word but Hanoi has accused overseas Vietnamese groups of fomenting “counter-revolutions” and foreign passports do not afford Viet Khieu, as the diaspora is known, any special protection.

In late 2017, a court in Ho Chi Minh City jailed 15 people for up to 16 years over a plot to bomb Tan Son Nhat airport with Molotov cocktails. One exploded.

Authorities claimed a force known as the Temporary Vietnam Government, based in California, was responsible for the plot, charging them with “acting to overthrow the people’s government,” “participating in terrorism” and “stockpiling military weapons.”

Media reports had linked Viet Tan, which promotes itself as non-violent organisation, with those arrests, but Phong said Kham’s trip was strictly fact finding.

There are about 200 political prisoners in Vietnamese jails, including five human rights activists from the Brotherhood for Democracy who are serving jail terms of up to 15 years for “activities aimed at overthrowing the people's administration” under Article 79 of Vietnam's 1999 Penal Code.

New York-based Human Rights Watch (HRW) added its weight to the chorus calling for their release, noting Vietnam’s human rights record remains dire in all areas. Police use torture and beatings to extract confessions and basic rights, including freedom of speech, opinion, the press, association and religion, are restricted.

"The repressive Vietnam government is obviously not content to just abuse and arrest the people in the country, but it also vigorously pursues overseas advocates of human rights and democracy,” said Phil Robertson, deputy director of HRW Asia.

“Because of his activism in Australia, Chau Van Kham must have known he would be targeted as soon as the authorities learned he was in the country.”

Kham and Vien could also be held under draconian new internet laws that came into effect on Jan. 1. Article 43 allows the government to collect private data and curb freedom of expression, the press and information despite those rights being recognized by the country's constitution.

It’s a law that also demands local internet service providers to remove content regarded as "harmful" to the government, while tech giants including Facebook and Google have been ordered to store their user data at offices inside the country.

Activists have vowed to fight that law and have warned Facebook founder Mark Zuckerberg, among others, he faces a boycott if his company complies.

Such confronting attitudes, while understandable, won’t help Kham and Vien, who have not been heard from for more than two weeks.

“Peacefully demanding human rights and political reforms shouldn't be considered a crime, so Vietnam should immediately and unconditionally release Kham and any others arrested with him," Robertson said.