No welcome for Rohingya in Hindu-dominated Jammu

Families who settled in the area have encountered new religious tensions 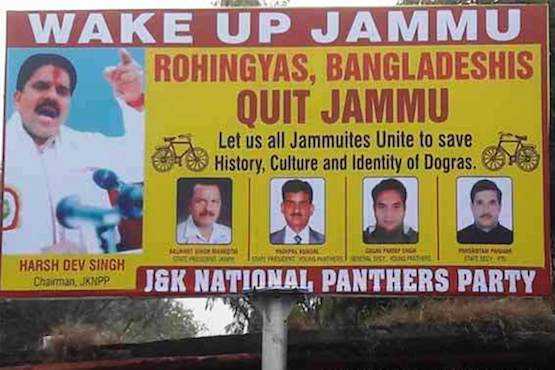 Mujeeb-ur-Rahman continues to fret every day for the safety of his two sisters and their children. For Rahman, a Rohingya Muslim, the memories of the massacres in Myanmar's Rakhine State in 2012 remain all too raw.

Nine months have passed since the 29-year-old and his family fled the terrors to head for India's Muslim-majority Jammu and Kashmir state, a landlocked region on the border of Pakistan.

According to government figures, 1,219 Rohingya families, comprising 5,107 family members, live in Jammu and Kashmir, 4,912 of whom hold UNHCR cards.

Hundreds of thousands of Muslim Rohingya people, fled their native Rakhine State following violence against them and discriminatory treatment in the Buddhist-majority state. The Myanmar government refuses to accept them as natives and considers them as migrants from Bangladesh.

Like many others, Rahman and his family settled in the Jammu area but soon encountered new religious tensions in the Hindu-dominated area within the state. While the Kashmir half of the state has 96 percent Muslims, the majority in Jammu favors the Hindus who make up 62 percent.

Hindu right-wing organizations, such as Vishwa Hindu Parishad (VHP, World Council of Hindus) have alleged that the Rohingya Muslims are directly linked to previous militant attacks in the state, describing them as "a risk to security" in Jammu.

Right-wing Hindu leader, Harsh Dev Singh, has made several public statements against the Rohingya in Jammu. Dev termed it a conspiracy to engineer "demographic changes" in the region. They also had billboards erected in Jammu that told Rohingya to go home.

Rahman told ucanews.com that Muslims like him were constantly "abused and threatened to leave" or face the consequences. "We preferred the latter," he said. He now works as a daily laborer and lives with his family in the Kashmir Valley.

The constant harassment, fear and threats the refugees face in Jammu from Hindu hard-line groups have left them feeling between a rock and a hard place. Many, who are afraid of the harsh winter of the Kashmir Valley, continue in Jammu, Rahman said.

He said at least 18 families with some 75 members, have fled the Hindu areas since November because of "sheer fright." They now live in encampments in central Kashmir's Ganderbal district.

Qari Hafeez-ur-Rahman, another Rohingya living in Kashmir with his family, told ucanews.com he left Jammu because of constant threats and intimidation. "We feel fortunate to be here as we face no threats and no danger from the local population," he said.

He said he memorized the Quran at the young age of 15 and worked as a local cleric in Rakhine State for 10 years.

Hafeez arrived in Kashmir after living in Delhi and Jammu for five years. Now, 30, he teaches the Quran to local Muslim students, which earns him 5,000 rupees (US$80) per month. Life has certainly improved for him since he moved to Kashmir.

Abdul Munaaf, a Rohingya Muslim, sits with his family. They migrated to the Muslim-dominated Kashmir after having experienced threats in the Hindu-majority Jammu area. (Photo by Umar Manzoor Shah)

Another Rohingya, Abdul Munaf, works as a laborer earning no more than 500 rupees a day. Despite facing no threats in Kashmir, he feels the place is not suitable for living. "It is pretty cold in winters here. If this weren't the case, all Rohingya experience the frightening conditions in Jammu would have come here."

It is also difficult to earn money every day, the laborer explained. The conflict between local militant groups, fighting to free the region from Indian rule, and the Indian forces often ends in violence and shutdowns.

Mynaaf dreams every day of returning to his homeland. "At the end of the day, we are refugees here. We cannot stay forever. We hope for peace to return to our home so we would be free to live as we did in the past."