Religious freedom 'will be respected' in proposed Muslim autonomous region Muslim legal experts have assured Christians and other minorities that religious freedom will be respected in the proposed Bangsamoro region in the southern Philippines island of Mindanao.

The establishment of the Bangsamoro, an autonomous Muslim region, is part of the peace deal signed by the Philippine government and Moro rebels last year to end a five-decade old insurgency.

"The proposed Bangsamoro is not even a separate state, much less an Islamic State," Ubaida Pacasem, head of the legal department of the National Commission on Muslim Filipinos, said July 9.

Philippine legislators' are currently deliberating the passage of the Bangsamoro Basic Law that will eventually create the Bangsamoro region in Mindanao.

Christians and other religious minorities living in Mindanao — a predominantly Muslim region — have voiced fears they could be subjected to sharia law when the region gains autonomy.

Pacasem, an expert on sharia said, "all peoples regardless of religion and cultural affiliation shall be respected" in the proposed Muslim region.

He said the sharia system would apply only to Muslims as had been practiced since Islamic justice was adopted and made part of the Philippine judicial system in 1977.

Sharia courts were established in the Philippines through a presidential decree issued by the late president Ferdinand Marcos.

Rodjipay Mangulamas, president of the Bangsamoro Shari’ah Lawyers League of the Philippines, said sharia law would respect religious differences in the region.

"The bottom line here is that the Bangsamoro government is neither about Islam nor about establishing an Islamic state," he said at a recent forum in Cotabato City. 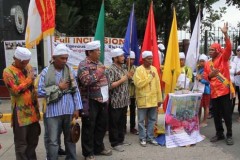 Tribes call for inclusion of rights in Mindanao autonomous region

"It's about respect for the long-sought Bangsamoro aspiration for self-determination and freedom from oppression and discrimination," he added.

All Bangsamoro residents "can rest assured that the regional government and judicial system will respect their religion," the Office of the Presidential Adviser on the Peace Process, said in a statement.