No safe space for women even on public transport 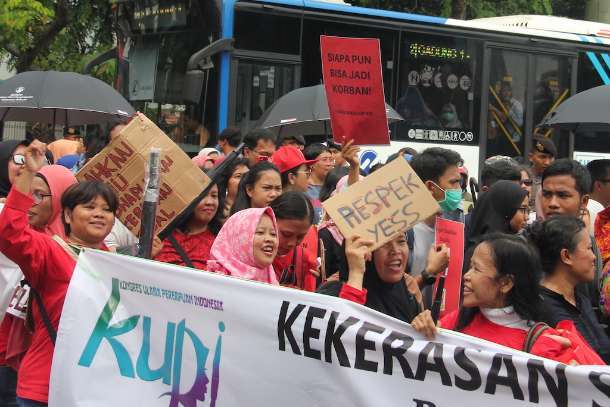 Activists and sexual violence victims hold a rally at the presidential palace in November 2018 to call on Indonesia’s government to settle cases and to pass the Sexual Violence Elimination Bill. (Photo: Konradus Epa/UCA News)

Shella, a secretary at a private company in Jakarta, was furious but helpless when she regularly faced sexual harassment on buses and trains.

“It happened at times when buses and trains were packed with passengers. The situation was used by several men to advance their sexual desires,” 23-year-old Shella (not her real name) told UCA News.

“Not only me but many women experienced similar treatment.”

The incidents happened long before the Covid-19 pandemic and even when she was studying at a university in Jakarta.

Shella said men took advantage of crowded buses and trains to fondle her and other women’s breasts. They sometimes rubbed themselves against women. When they were noticed, they immediately moved away.

She said it was a traumatic experience but she had no other choice but to take the same public transport so that she could get from her home in Bekasi, West Java, to her office in the Indonesian capital on time.

“I have to take public transport because it is cheaper and faster,” she said.

According to a 2019 survey by the Coalition for Safe Public Space, of 62,224 women surveyed in 34 Indonesian provinces, about 47 percent said they had experienced sexual harassment on public transport.

Andy Yentriyani, chairwoman of the National Commission on Violence against Women, acknowledged that sexual abuse against women increases every year, including cases on public transport.

She said many cases like Shella’s had been reported to the commission. Sexual abuse also happens in schools, houses, offices and campuses, and by phone or on social media. She noted that law enforcers have not settled cases because there was not sufficient evidence to be processed legally.

The women and child protection unit of the Indonesian police’s criminal investigation department has reported an increase in sexual abuse against women.

Although there was no mention of sexual harassment on public transport, it remains a big concern for women and human rights activists.

Yentriyani said reported sexual abuse cases, including those on public transport, are the tip of the iceberg. Many women did not report cases because they felt ashamed and considered it a disgrace. Moreover, it relates to their private space, so they are reluctant to report cases.

“It’s a mistake because it gives space to the perpetrators to act with the same criminality against other women,” she said.

Yuli Nugrahani from the Indonesian bishops’ Women and Gender Secretariat agreed with Yentriyani.

“Our society prefers silence, although those acts are clearly against the law,” she told UCA News.

She said she completely disagreed with parents or victims who still consider it a disgrace to speak out about sexual abuse.

“Some people are too afraid to speak, while others are easily lured with money,” she said, referring to perpetrators who offered money to victims to remain silent.

Unfortunately, she said, most cases happen in areas that were supposed to be a safe space for women, including houses, schools, campuses and rehabilitation centers.

She cited a case in Lampung in Sumatra last month when an underage girl — a sexual abuse victim — was raped by a staff member in a rehabilitation center.

Shella, Yentriyani and Nugrahani urged the government and legal officers to uphold the law and side with victims of sexual abuse.

“Our laws are overlapping, and in some instances even victims are criminalized, such as Baiq Nuril’s case,” she said.

Nuril, from Mataram, West Nusa Tenggara, was sentenced to six months in prison for revealing sexual harassment over the phone by the head teacher of the school where she worked. She was accused of violating the electronic transaction law by recording calls but was freed after receiving an amnesty from President Joko Widodo.

Yentriyani said the parliament and government must immediately pass the Sexual Violence Elimination Bill as a deterrent to sexual predators.

Nugrahani said the law will become a “weapon” in the fight against violence against women.

Minister of Women’s Empowerment and Child Protection I Gusti Ayu Bintang Darmawati hopes that the bill will be passed next year.

But in the meantime law enforcers must act tough in sexual abuse cases. “The police must investigate any case reported to them and must not hesitate to give severe punishment to the perpetrators,” she said.