No room for benchwarmers, pope tells youths at vigil 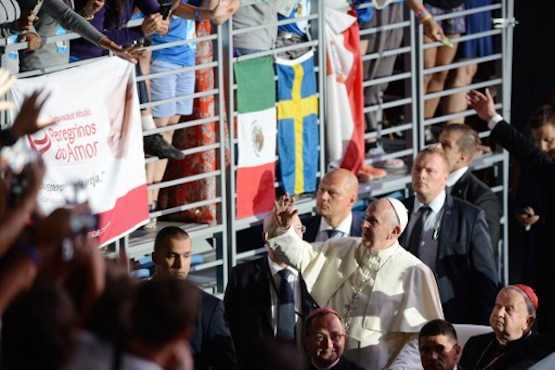 Pope Francis arrives to meet with volunteers on July 31, 2016 at Tauron arena in Krakow on the last day of the World Youth Day celebrations. (Photo by AFP)

Pope Francis told young people they are not called to be couch potatoes, living boring lives, but should leave their mark in history and not let others determine their future.

Like a soccer match, life "only takes players on the first string and has no room for benchwarmers," the pope told young people at a World Youth Day prayer vigil July 30. "Today's world demands that you be a protagonist of history, because life is always beautiful when we choose to live it fully, when we choose to leave a mark."

Organizers said up to 1.6 million youths from around the world — many of whom walked more than six kilometers to the Field of Mercy — attended the prayer vigil with the pope.

Arriving in his popemobile, Pope Francis waved at the throngs of young people who stretched out their hands. Stopping at a wooden Door of Mercy inscribed with the words "Jesus, I trust in you" in five languages, he was greeted by several young men and women. Hand-in-hand with the pope, they entered through the door.

The pope then surprised the youths by inviting them aboard the popemobile. Visibly emotional and wide-eyed, the youths boarded the vehicle and joined Pope Francis, waving at the crowd.

After taking his place on the stage, young people from Poland, Syria and Paraguay gave their experiences of finding hope in the midst of disbelief, war and addiction.

Between the testimonies, dancers performed. A woman depicting St. Faustina Kowalska looked on in disbelief as youths in glass boxes were fixated on their cellphones and tablets. A young woman dressed in white danced around them, beckoning them to come out.

Another performance on the beauty of forgiveness recreated the scene in which St. John Paul II sat down with would-be assassin Mehmet Ali Agca in his prison cell and forgave him.

Silence descended on the field as the pope bowed and joined the youths in prayer.

Pope Francis continued his address by warning the pilgrims to not fall into a "paralysis that comes from confusing happiness with a sofa." This sofa that promises comfort, safety and relaxation, he said, instead is an "insidious form of paralysis" that makes young men and women become "dull and drowsy."

Pope Francis encouraged the pilgrims, reminding them they are not called to "vegetate" in life but to leave a mark in the world.

"When we opt for ease and convenience, for confusing happiness with consumption, then we end up paying a high price indeed: We lose our freedom," he said.