No result after first day of conclave

Three front runners may be emerging 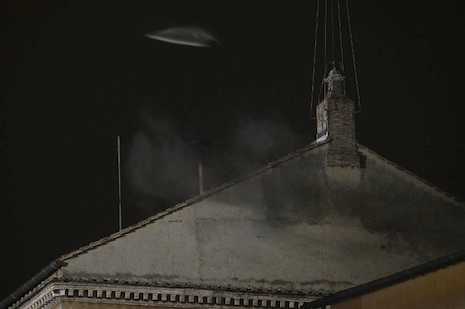 Cardinals held a first inconclusive vote in the Sistine Chapel on Tuesday as they began the process of electing a successor to Benedict XVI, with tens of thousands of people packed into St Peter's Square to watch the time-honoured tradition.

The crowd cheered as black smoke billowed into the night air above the Vatican from a thin copper chimney on the chapel's roof, indicating that no pope had been elected.

The eyes of the world will be fixed on the chimney in the coming days for the smoke signals sent out twice daily -- white smoke will indicate that a new leader of the world's 1.2 billion Catholics has been chosen.

The scarlet-robed "Princes of the Church" swore on the Bible never to reveal the secrets of their deliberations or face being cast out of the Church, before the chapel's heavy wooden doors swung shut to indicate the lock-in had begun.

The chapel has been swept for bugs and installed with jamming devices to prevent electronic communications, leaving cardinals entirely cut off from the outside world behind the Vatican's walls until they have elected a new pontiff.

At an extravagant pre-conclave mass in St Peter's Basilica the cardinals prayed for unity in the Church -- a stark reminder of the infighting that often overshadowed Benedict's eight-year reign.

As rainstorms drenched pilgrims outside, the cardinals burst into thunderous applause when the dean of the College of Cardinals, Angelo Sodano, thanked the "beloved and venerable" Benedict.

On the Vatican's 17th-century plaza, a barefoot pilgrim in a sackcloth habit knelt on the cobblestones in the pouring rain and bowed his head in prayer as the chants from the mass echoed across the square from four giant screens.

"Without a pope I feel bereft, like an orphan," said French priest Guillaume Le Floch, 35.

"The Church needs a great leader now more than ever. The cardinals have a chance to astonish us."

The smoke from the Sistine Chapel is produced by burning the ballots in a special stove and adding artificial smoke, the Vatican engineer in charge of preparing the chapel, Paolo Sagretti, told AFP.

"We use smoke flares," he said.

After several episodes in which greyish smoke that could be interpreted as white or black created confusion, the Vatican introduced the surer system starting with the last conclave in 2005.

Modern-day conclaves normally last no more than a few days and a two-thirds majority is required.

Like "pope emeritus" Benedict XVI, all of them combine conservative views with social advocacy on issues like poverty, conflict and immigration.

All the cardinals were appointed either by Benedict or John Paul II.

But cardinals from Austria, Hungary, Mexico, the Philippines, South Africa and the United States -- some of them with more reformist outlooks -- were also rumoured to be in contention.

Bookmakers said Scola was the favourite, followed by Ghana's Peter Turkson and Scherer.

"Some imagine him to be more academic, able to establish a dialogue with culture. Others ask for someone who is close to the people. Others still want someone with more authority to put some Church problems in order," he said.

"So far, there is no majority."

A few key aims unite many of the cardinals, such as reforming the intrigue-ridden Vatican bureaucracy and re-igniting Catholic faith in the way the charismatic John Paul II did.

There have been calls too from within the Church for a rethink of some basic tenets such as priestly celibacy, the uniform ban on artificial contraception and even allowing women to be priests as in other Christian denominations.

The tradition of holding conclaves dates back to 1268 when cardinals were locked into the papal palace in Viterbo near Rome by an angry crowd because they were taking too long to choose a pope.

Their conclave still dragged on for three years.

Italian media reported the cardinals will be served plain but wholesome food at their Vatican residence -- where the windows are locked shut and telephones are for internal use only.

"Perhaps this food, similar to that served in hospitals, will help to speed up the choice of a successor," the paper said.

The 85-year-old Benedict announced on February 11 that he no longer had the strength of body and mind to keep up with the modern world.

In a series of emotional farewells, the German said he would live "hidden from the world" and wanted only to be "a simple pilgrim".

Paula Murphy from Ireland, 38, who came with her parish for the conclave, said she was hopeful the election would breathe new life into the Church.

"I'm so excited! It's a moment for renewal." AFP