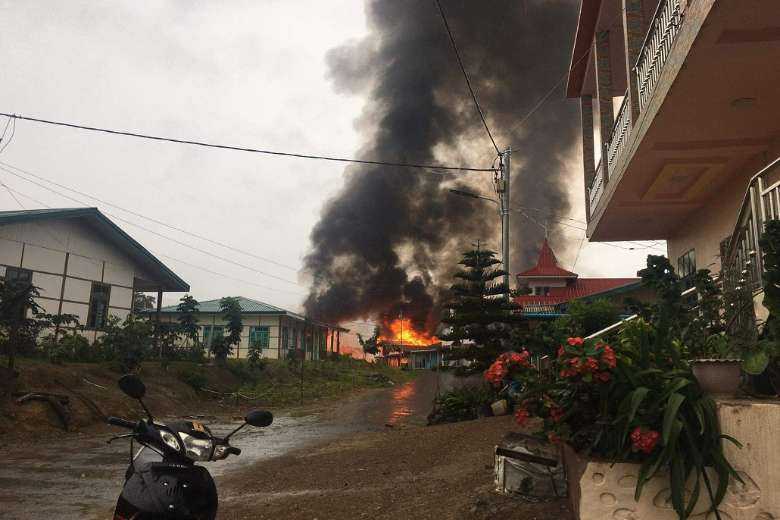 At least 18 homes and a government building were burned down in Chin state’s Thantlang township on Sept. 18 during a three-hour clash between the Chinland Defence Force and junta forces. (Photo: AFP)

The elderly, women and children barely had time to pack their belongings as they fled their homes to escape indiscriminate attacks by Myanmar’s military in Chin state, a Christian stronghold.

At least 8,000 people — the entire population of Thantlang town where most people are ethnic Chin — were forced to abandon their homes following the Sept. 18 military assault on civilians that led to the deaths of several civilians including a young Baptist pastor.

People have taken refuge in nearby villages and forests while others have fled across the Indian border to Mizoram.

At least 12,000 people remain displaced in several townships in Chin state since fighting escalated between the military and ethnic armed groups and local resistance groups in May.

People seeking shelter in churches, makeshift camps and forests face a food shortage and are in dire need of medicines due to the military’s road blockade.

At least 100 ethnic Chins have been killed by security forces since the Feb. 1 coup, according to Chin rights groups.

Chin state in western Myanmar is one of the poorest states in the country due to neglect by the military regime for decades. Over 90 percent of Chins are Christian, with most identifying as Baptists.

The mountainous region has not seen armed conflict and military assaults for more than two decades.

Since the 1990s, the military-led government has persecuted Christians in Chin state by cracking down on proselytization, destroying places of worship and attempting to forcefully convert believers to Buddhism.

This campaign of “Burmanization” or forced assimilation continues unabated and has caused the displacement of over 160,000 Chin who have migrated to India, Malaysia and Thailand, according to an International Christians Concern report on June 16.

Amid the recent conflict, churches in Chin state have been attacked by artillery shelling while soldiers have camped in church premises and destroyed church property, Bibles, hymn books and strewn rubbish.

The military has stepped up troop deployment to crack down on resistance groups, especially in Chin state and Sagaing and Magwe regions in northwest Myanmar, following a call for a people’s defensive war by the National Unity Government, the shadow government in exile set up by ousted lawmakers, activists and ethnic groups.

The military cut internet access in at least 11 conflict-torn districts in Chin, Magwe and Sagaing effective from Sept. 23 following an escalation in fighting in the regions.

The Southeast Asian nation is descending into political turmoil and widespread civil war following the coup that toppled the elected civilian government.

The ensuing region of terror against civilians and pro-democracy protesters has led to at least 1,136 deaths and more than 8,000 people detained.

More than 206,000 people have been displaced in predominantly Christian areas of Chin, Kayah, Kachin, Karen and Shan states due to the escalation of the conflict and more than 3 million people are in need of aid, according to the latest UN report.

More than 100,000 people remain in camps in Kachin state — another Christian stronghold — since fighting flared up between the military and the Kachin Independence Army.

The latest military assault on Christians in regions inhabited by the Chin, Kayah, Kachin and Karen has highlighted the persecution and oppression of minority Christians who have borne the brunt of the decades-old civil war. They also face arbitrary arrests, killings, torture and rape at the hands of the military, which ruled the country for more than five decades.

Myanmar has had one of the longest-running civil wars in the world since gaining independence from Britain in 1948.

Christians make up some 6 percent of Myanmar’s population of 54 million, while Buddhism is the state religion which represents nearly 89 percent.

The country was ranked 18th in Open Doors USA’s 2021 World Watch list of countries where Christians face the most severe persecution. Religious nationalism is especially strong in Myanmar and drives much of the persecution of Christians.