No peace in Kashmir even during Ramadan 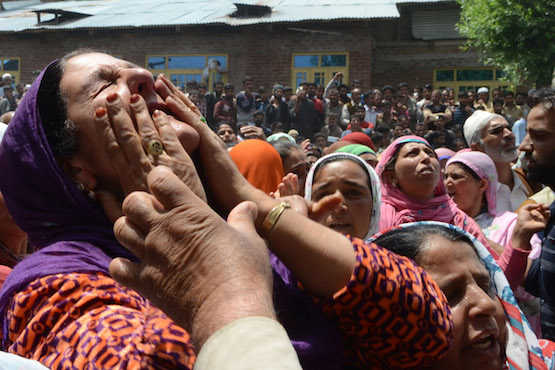 Women cry during the funeral procession of a slain policeman in his native village of Budgam in Jammu and Kashmir state June 16. (Photo by Umer Asif)

Violence continues unabated in India's only Muslim majority Jammu and Kashmir state as armed clashes between Islamic militants and government forces refuse to cease even during the ongoing Muslim holy month of Ramadan.

Eleven people were killed over the weekend. Six policemen died after an Islamic militant group ambushed their vehicle in the state's Anantnag area. Three militants and two civilians were also killed in separate gunfights across the region.

The month of Ramadan, which this year started May 26, is considered by Muslims as a holy month where they observe a dawn-to-dusk fast without food or even water as an exercise in spiritual self-purification.

However, Ramadan brought no respite to the violence in the region where Islamic militants began an armed struggle some three decades ago against Indian rule. So far this Ramadan, at least 16 people have died due to the violence.

While some groups want freedom from India others want to join neighboring Pakistan, an Islamic state.

Kashmir has been divided between Pakistan and India since the end of British colonial rule in 1947 but both lay claim to the entire territory.

Ramadan began with death of a civilian who was protesting the killing of a militant Sabzar Bhat in a gun battle with the army a day earlier.

Soon after authorities enforced a curfew, stopped internet services for days and locked down the Grand Mosque for prayers.

On June 14, militants carried out a series of attacks on government forces at different locations, leaving 13 security personnel injured within the span of four hours.

Local people have taken to the streets to protest the militant attacks and army raids against them in villages. In several villages youths threw stones at government forces in a bid to break the cordon and help militants escape.

Defying curfew, thousands of people attended the last rites of militant Junaid Matoo, who was killed during by the army June 16 at his native town Kulgam.

Mirwiaz Umar Farooq, Kashmir's chief religious cleric and separatist leader said such tensions during the Muslim holy month are unheard of. "For how long will the Indian government refuse to accept the reality of Kashmir and accept its disputed nature?" Mirwaiz asked.

The Kashmir region has been witnessing a spree of killings and protests after militant leader Burhan Wani was killed by the army on July 8 last year.