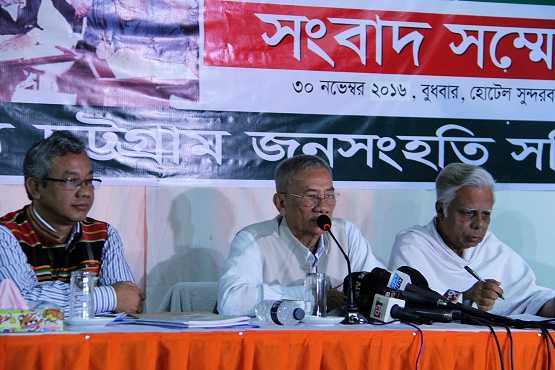 Indigenous leaders and activists accuse the Bangladesh government of failing to implement the Chittagong Hill Tracts peace accord during a press conference in Dhaka on Nov. 30. (ucanews.com photo)

Indigenous leaders and activists have slammed the Bangladeshi government for not implementing a peace accord signed in 1997 that was supposed to give them land and respect.

The failure to fulfill the peace accord is responsible for ongoing sectarian violence between indigenous people and settler Bengali Muslims in the southeastern Chittagong Hill Tracts (CHT), according to activists.

"Over the past 19 years, six governments have come to power but none of them had any intention of implementing vital components of the peace accord," Jyotirindra Bodhipriya Larma, president of the United People's Party of CHT, said during a press conference in Dhaka on Nov. 30.

Larma is the former leader of Shanti Bahini, the armed wing of his party, that waged a 20-year guerrilla war against Bangladeshi forces and settler Muslims until the peace deal was signed.

"The government claims to have implemented 48 sections of the accord out of 72, but the real figure is only 25," Larma said, adding that his party would continue its non-cooperation movement until the terms are met.

"The government has continued to bring in Bengali settlers from the outside in order to change the demography of the hills. Tribal people are being evicted and displaced to make way for settlements and new tourism spots," Tripura told ucanews.com.

"A group of ultra-nationalists in the government are blocking the implementation of the accord," Tripura added.

Naba Bikram Kishor Tripura, secretary of the Chittagong Hills ministry, refused to comment on the issue.

During a rally in the hills on Nov. 29, Obaidul Kader, secretary of the ruling Awami League party, said the government is keen to fully implement the accord.

"Land disputes are the most serious problem in the CHT and the government has set up the Land Dispute Resolution Committee which has already started to work to resolve land disputes in the shortest possible time," Kader said.

"In the meantime, the government has taken various steps to uplift the living standards of the CHT people," he added. A group of indigenous women in Bandarban district in southeastern Chittagong Hill Tracts in Bangladesh in 2014. (ucanews.com file photo)

Although Christians in the Chittagong Hills are a minority, some hill tribes such as the Tripura, Bawm and Marma are largely Christian.

A senior church official, who asked not to be named, told ucanews.com that the church faces challenges working there.

"Anti-tribal Muslim groups hate the church as it stands for the rightful demands of the tribal people and makes them aware of their rights by educating and empowering them. That's why they often run hate campaigns claiming that the church and Caritas are converting tribal people and Muslims," he said.

Francis Tripura, secretary of Chittagong Diocese Pastoral Service Team in the Chittagong Hills said that the whole region would benefit from an implemented peace deal.

"The only solution is giving property and power back to people who deserve it by fulfilling promises made to them in the peace accord," Tripura told ucanews.com. Our Lady of Fatima Catholic Church in Bandarban district in southeastern Chittagong Hill Tracts in Bangladesh in 2013. (ucanews.com file photo)