Decision comes a week after an unusual increase in Covid-19 infections, reportedly from Christian gatherings 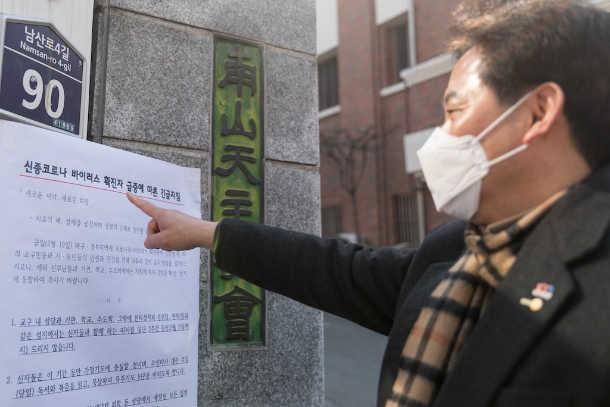 A Catholic in Daegu Archdiocese reads a directive banning Masses placed in front of Nasam Parish on Feb. 20. The archdiocese is seeking to contain the fast-spreading Covid-19 virus. (Photo: Catholic Times)

With reports of the Covid-19 virus spreading from religious gatherings, a South Korean archdiocese has suspended all Masses for three weeks and effectively cancelled Ash Wednesday liturgy — a week after Hong Kong Diocese took a similar decision.
Archbishop Thaddeus Cho Hwan-kil of Daegu in an urgent directive on Feb. 19 banned all church gatherings, including Masses, for three weeks until March 5. The directive applies to all parishes and religious houses under his jurisdiction. The decision comes after new cases of infections were reported from Christian gatherings in the archdiocesan area. On Feb. 19, South Korea reported its first death from the coronavirus epidemic.

South Korea reported 82 infections on Feb. 19 but 51 were new cases reported on that day and the previous day. Of the 51, at least 37 cases were reported from the Daegu area and in people who attended prayer programs of a Christian sect popularly called Shincheonji, local reports said. Experts linked the new infections to a member of the sect, identified only as the 31st patient. The 61-year-old woman, who tested positive early this week, reportedly attended prayer programs before and after she had symptoms of virus infection. The urgent call of the archdiocese asked all priests to stop public Masses and urged Catholics to pray in homes and engage in spiritual exercises, including the reading of the Gospel, to observe the day of obligation, it said. On Ash Wednesday, which falls this year on Feb. 26, Catholics should fast and abstain from meat, although they have no liturgy on that day. The day marks the beginning of Lent, seven weeks of prayer, fasting and abstinence for Catholics in preparation for the feast of Easter that commemorates Christ’s resurrection. The Korean archdiocese’s move comes a week after Hong Kong Diocese suspended all church programs for two weeks on Feb. 13. It meant canceling the Ash Wednesday liturgy too. Hong Kong’s apostolic administrator Cardinal John Tong said the “disappointing” decision was taken because the next two weeks “will be a crucial” to subdue the epidemic. After weeks of panic and confusion, the epidemic situation is reportedly stabilizing in China, where the new coronavirus was first reported in December. Cases have subsided in Hubei province, considered the epicenter of the virus. On Feb. 19, the province reported only 349 new cases against more than 1,600 reported the previous day, official news service Xinhua reported. Across the globe, 2,247 people have died from the virus from more than 76,000 confirmed cases, with most reported in mainland China. On Feb. 19, Hubei province reported 108 deaths, which was significantly less than the death rate of the previous week.