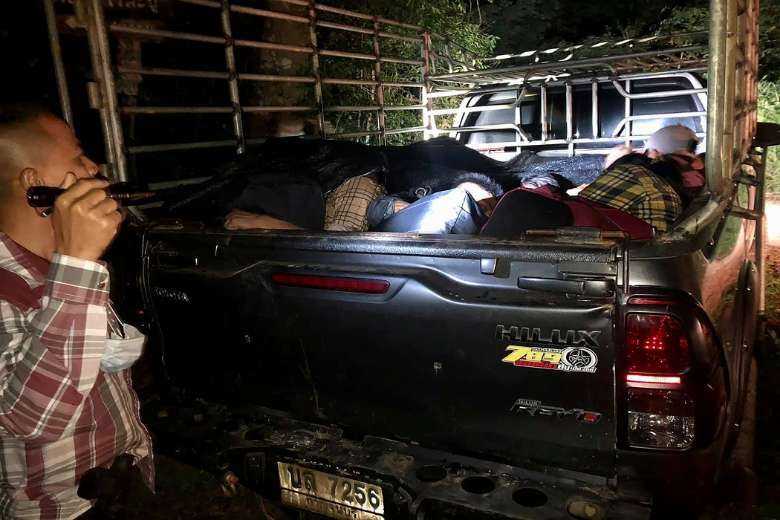 An official inspects detained Myanmar migrants caught in a vehicle in the Thai province of Kanchanaburi, bordering Myanmar in this May 2021 file photo. (Photo:AFP)

Thai authorities continue to deny a safe haven to migrants from Myanmar fleeing political persecution and economic hardship in their homeland with many arrested over the past few days for crossing the border illegally.

In one incident on Sept 12, six migrants, five men and a woman, were detained for entering the country illegally in the western Thai border province of Kanchanaburi.

The migrants told authorities they were from Dawei and Bago townships in Myanmar and were on their way to Nakhon Pathom province in Thailand where jobs had been promised to them.

The day before, 14 migrants from Myanmar were arrested while trying to cross into Malaysia from a southern Thai province.

The migrants, who hoped to find well-paying employment in Malaysia after failing to do so in Thailand, said they had each paid brokers 3,500 Malaysian ringgit (US$845) to be taken to Malaysia.

Human-trafficking gangs routinely prey on desperate migrants from countries such as Myanmar, Cambodia and Laos by offering them jobs in Thailand or Malaysia in return for payment.

Often the traffickers abandon migrants to their fate after helping them cross the border into Thailand, according to migrant rights advocates.

In other cases, migrants are victimized by becoming heavily indebted to brokers for prolonged periods with all their earnings withheld from them as “repayment” for their having been employed.

“Not only are Thailand’s migrant workers susceptible to discrimination but they can be coerced into paying high recruitment fees on the way from their home country to secure a job,” said Darian McBain, director of corporate affairs and sustainability at Thai Union.

As a result of persistent allegations that numerous migrants from countries such as Myanmar end up being victims of forced labor and debt bondage, the United States recently downgraded Thailand’s status from a Tier 2 nation to a Tier 2 Watchlist nation in its latest US Trafficking in Persons Report.

The report added that Thai authorities “did not demonstrate overall increasing efforts” to tackle the problem.

Rights advocates have long been calling on the Thai government to step up measures to protect migrants from becoming victims of traffickers and unscrupulous employers.

In some sectors such as fishing abuses of migrant workers are especially common, rights activists say.

In a recent report, Human Rights Watch warned that “[f]orced labor and other rights abuses are widespread in Thailand’s fishing fleets despite government commitments to comprehensive reforms.”

Complicating the precarious situation of migrants is that labor laws aimed at protecting them are routinely not enforced.

“No one should be fooled by regulations that look good on paper but are not properly enforced,” said Brad Adams, Asia director of Human Rights Watch.