No justice for Sri Lanka's missing and killed journalists

A culture of impunity for those who target the media must end, say activists 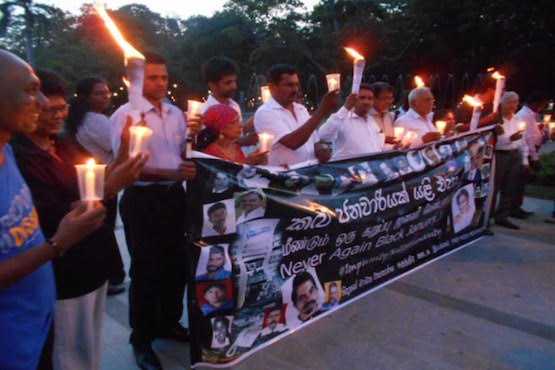 Journalists commemorate Black January on Jan. 21 in Colombo and call on the government to further investigate past killings and enforced disappearances of media workers. (Photo by Quintus Colombage)

Six year ago, Sri Lankan political cartoonist and columnist Prageeth Ekneligoda left his office and was never seen again. Since then his family have never stopped searching for the truth behind his disappearance.

"I started to demand justice for my father when I was age 14," says Ekneligoda's eldest son Sanjaya. "We will never give up until we find who was behind the disappearance."

Ekneligoda was then working for Lanka eNews, an independent online publication that backed political opposition leader Gen. Sarath Fonseka. As a journalist, Ekneligoda reported on alleged corruption among family members of Mahinda Rajapaksa who was the country's president from November 2005 to January 2015.

Sanjaya is pleased progress has been made into the investigations but he fears people of influence are interfering with the case behind the scenes.

Sri Lanka has the unenviable reputation of being described by the Committee to Protect Journalists as a country where "journalists are murdered and their killers go free."

Despite this, Sanjaya said his mother has never given up hope in finding justice for her husband.

"My mother is a courageous woman," said Sanjaya. "She went everywhere to make her voice heard, even to the United Nations to get support for the investigations but not only for my father but also for all the disappearances of other media workers over the years," he said. The family of missing Sri Lankan journalist Prageeth Ekneligoda attended an exhibition at the Goethe Institute in Colombo that marked his sixth year of disappearance. Sanjaya Ekneligoda, right, his mother Sandya and younger brother Dhananja are still seeking answers to Prageeth's fate. (Photo by Niranjani Roland)

Since 2011, January has been used as a month to draw attention to the killing and forced disappearance of journalists in Sri Lanka.

"After Sri Lanka's civil war ended in 2009, the media and journalists faced many difficulties in the country," said Ranjani.

"There were many awful incidents that took place during the month of January," she said.

Among those incidents was the case of Lasantha Wickrematunge who was killed in January, 2009. The veteran journalist was shot dead in a broad daylight on a public highway, a few hundred meters from a security checkpoint.

Another journalist, Subramaniyam Sugitharajah, was killed on Jan. 24, 2006. It was the same day the photos he took of dead Tamil students murdered by the Sri Lankan army were published.

Through initiatives such as Black January, Sri Lankan journalists are pressing the government to fully address the country's history of media suppression.

Since the election of President Maithripala Sirisena in January 2015, the new government has showed a willingness to acknowledge past abuses and commit to reforms.

As part of that they have promised to combat a culture of impunity that emboldens assailants.

Prime Minister Ranil Wickremesinghe told parliament last December that the government would pay compensation to the families of 44 journalists who have been killed.

However there has been little government support forthcoming to investigate the deaths of Tamil journalists.

Thev Athiran, president of Federation of Eastern Journalists, told ucanews.com that he hasn't seen any progress in the investigations into Tamil journalists who have been murdered.

"Most of the families of killed Tamil journalists have left the country due to fear," said Athiran. "Sugirtharajan's wife was frustrated that none of the investigations was carried out," he said Athiran.

"Several times she has gone to the police regarding the investigations and in 10 years there has been no headway in solving his murder," he said.

Father Terrance Fernando, who also is an activist for Sri Lankan media freedom, said that perpetrators have not been punished.

"It is a pathetic situation that none of the investigations have started for the killings of Tamil journalists," said the priest who work's in the country's north.

"The local church does not play a prominent role in putting pressure on the government in this regards," the priest worried.