With a police investigation going nowhere, relatives want Catholic victims to be declared martyrs who died for their faith Lolita Biswas, 41, a Catholic mother and widow, seeks justice for the bombing of Most Holy Redeemer Church in Bangladesh that killed 10 people including her husband Satish. (Photo: Stephan Uttom/UCA News)

The straight, narrow mud road that divides endless rice fields holds an unforeseen turn to the house of the Biswas family in Koligram village.

Memories of Satish Biswas, the head of the family, are still fresh inside the tin-roofed home. He was among 10 people killed when Islamic militants exploded a bomb inside their parish church 20 years ago.

“Our sorrowful life continues amid struggles. I can’t remember when I bought my last saree,” Satish’s widow Lolita Biswas said as she sat on a rickety red plastic chair caressing the stitches on her torn saree.

“Sometimes I get old sarees from people and I use them. With support from the parish and relatives, I have helped my son to continue education.”

Lolita was just 21 years old when a bomb exploded on Sunday, June 3, 2001, inside Most Holy Redeemer Catholic Church in Baniarchar, a village in Bangladesh’s Gopalganj district.

She and her one-year-old son didn't go to church that Sunday. "My husband went but returned home dead,” Lolita told UCA News with her voice choked and eyes filled with tears.

The lackluster attitude of the police is condemnable. They have no respect for feelings of ordinary people. I don't know what a father's love is

Lolita didn’t give up the fight for survival. The parish offered her a job in the church-run primary school as an office assistant, which pays her a monthly salary of 1,800 taka (US$21).

The parish has some 3,000 Catholics who live side by side with their Hindu and Muslim neighbors. Most villagers are farmers and daily wage workers, hardly having enough resources to support themselves.

The tragedy required support for the families of the 10 men killed in the explosion. Just like 24-year-old Satish, seven victims were the only sons and sole breadwinners for their families. 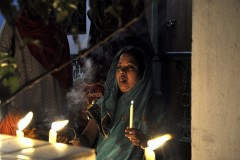 Even after 20 years, the police have not completed their investigation. Some 38 suspected militants have been arrested, but none reportedly confessed their involvement in the bombing.

“The lackluster attitude of the police is condemnable. They have no respect for feelings of ordinary people. I don't know what a father's love is. I suffer from the emptiness of not having a father,” he told UCA News.

He wants the church to declare the victims as martyrs who died for their faith.

But Mohammad Asad, the police officer who is leading the case now, claimed that police were investigating the case with “due diligence.”

“We have faced difficulties in finding eyewitnesses. Moreover, since this is a sensitive case, a thorough investigation is needed, and the police are continuing their efforts from all sides,” Asad told UCA News.

Father Gemain Sanchay Gomes, the parish priest, said police officers “keep coming but no progress with the case is reported.”

On the 20th anniversary of the tragedy on June 3, the parish organized a meeting and human chain program demanding justice. “The church is doing what it can but we have limitations,” Father Gomes told UCA News.

Hannan, a former mujahidin in the Afghan war, was hanged in 2017 after he was found guilty of a bomb attack on British High Commissioner Anwar Choudhury in 2004.

However, the church bombing case lingers on largely because investigating officers have been changed 23 times in the past 20 years. Police have yet to file a charge sheet to the court to kick off a trial. The families of the victims are waiting for the court to punish those who destroyed their lives.

Some are aged parents like Sukhranjan Halder, 77, and his wife Anna Halder, 70. Their 24-year-old son Sumon was among the dead.

Water trickles down to their shabby house from the holes in the tin roof when it rains. The wooden fence surrounding their dwelling is about to crumble.

“We have no one to support us,” Sukhranjan said, looking aimlessly at the rice fields outside.

“If my son was alive, our life would have been different. We might have lived a better life. But God took our son away. We are in trouble now, but I believe our son Sumon is now in heaven” he told UCA News in a broken voice.

The monetary support they get is insufficient to meet their needs and medical expenses.

Anna has suffered from high blood pressure and mental illness since the shocking death of her only son. She is partially paralyzed and is bedridden. Sukhranjan suffers from rheumatic joint pain and acidity problems.

The couple said they live only to see that justice is done by punishing those who engineered the explosion. “But I’m not sure our last wish will be materialized before we breathe our last,” the elderly man said.

Sukhranjan, just like family members of other victims, wants the 10 dead Catholics to be declared as martyrs and their memory perpetuated by programs on every anniversary.

“At least the souls of the deceased will find peace and the families will get some consolation,” he said. Most Holy Redeemer Church in Baniarchar of Bangladesh where Islamic militants set off a bomb that left 10 men dead and about 50 people injured. (Photo: Stephan Uttom/UCA News)