For relatives of the missing, All Souls' Day a reminder of unanswered questions 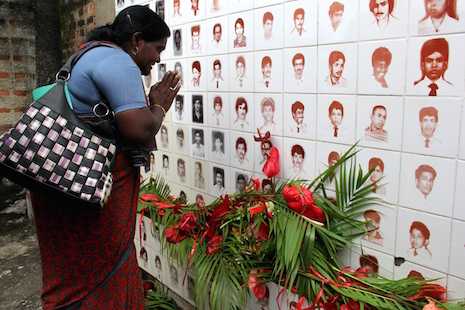 A Tamil woman cries after offering a floral tribute to relatives who disappeared in Sri Lanka during the 1980s. (Photo by Quintus Colombage)

S.M. Premasilee is not sure whether she should or not pray for the souls of her relatives. That's because she doesn't know if her husband and two brothers are still alive or dead.

The 61-year-old Tamil woman nonetheless travels more than 250 kilometers to pay homage at a specially erected monument for those who have no tombs — people like her relatives, who disappeared at the hands of Sri Lankan security forces in the late 1980s.

The monument, erected in 2000 with about 600 photos of Sinhalese and Tamil people who disappeared, is in front of St. Cecilia's Church, on a tiny strip of land in Raddoluwa in Colombo Archdiocese. It was here in this former "no man's land" between government forces and rebels that two bodies were found in 1989.

"November is the month to remember the dead but we have no graves, no place to light a candle and no place to lay flowers like others," said Premasilee, who hails from Hambantota in southern Sri Lanka.

"People remember loved ones departed but I don't know what happened to my husband and two brothers," she said.

During the 1980s, it was "usual" to find bodies of unknown people everywhere, Premasilee said.*

"My husband and two brothers were abducted by the army, and when we inquired about them, we were told the army had mistakenly identified them as rebels," she added.

Since then, they remain among the thousands who disappeared and can only be presumed dead. S.M. Premasilee lost her husband and two brothers in Sri Lanka in the 1980s. She says she doesn't know if they are alive or dead. (Photo by Quintus Colombage)

While Catholics worldwide observe All Souls' Day on Nov. 2, people in Sri Lanka pay homage to their dead during the whole month of November. Relatives gather every year to lay flowers and conduct religious rites at this monument in case their disappeared loved ones have indeed died.

"I know many who have never recovered from their son or husband's disappearance," said Premasilee.

"I was also beaten up several times by the military but still have the courage to ask for justice over every single disappearance in the country," she said.

In 1983, the Sri Lankan government became embroiled in a brutal civil war against the Liberation Tigers of Tamil Eelam, an insurgent group that fought to carve out a separate Tamil homeland in the country's North and East until the group was defeated by government forces in 2009.

About 40,000 civilians died during the final days of that war. It was a period of unlawful killings, disappearances, arbitrary arrests and torture from both sides.

During the civil war, the Janatha Vimukthi Peramuna (people's liberation front) also launched a militant Sinhalese nationalist insurrection in 1989. The government countered with a brutal offensive in which the insurrection was crushed and an estimated 60,000 were killed or disappeared. Sri Lankans visit a monument with about 600 photos of Sinhalese and Tamil people who disappeared. The monument, constructed in 2000, sits in front of St. Cecilia's Church, Raddoluwa in Colombo Archdiocese. (Photo by Quintus Colombage)

A war ends, but the damage remains

"The war is over and our loved ones are still missing, but we have not yet given up the search," said J. Selvarani, a mother of two.

Like Selvarani and Premasilee, other relatives of the disappeared can only place flowers and say prayers before images of their loved ones.

Antanet Theresa, a Catholic mother of three, said she dosen’t know what to tell her children about their father.

"How did he disappear? Government officials say they don’t know anything about our loved ones," she said.

"Many like me ran to the nearest police station to lodge complaints but the police simply refused to accept them," she recalled.

The disappearances during the civil war hit both Tamil and Sinhalese families. Many people also took advantage of the war to settle private disputes. They hired private militia to wipe out those who opposed them.

Britto Fernando, president of the Association for Families of the Disappeared, said the monument near St. Cecilia’s Church has also become an important symbol and record of a tragic part of the country’s history.*

According to him, disappearances were frequently used as a strategy to generate fear and insecurity.

"The government should reveal what happened to all the disappeared and where they died," he said.

"Give compensation, rehabilitation and restitution to family members. Give them a guarantee that it won’t happen again," Fernando said.

Father Sherad Jayawardana, a Catholic priest, said relatives have the right to ask what happened to their loved ones.

Only then can Sri Lankans hope there will be no enforced disappearance in the future, he said.

The government has promised the international community it will bring justice for the families of those who disappeared, according to Mano Ganesan, Sri Lanka’s minister for national dialogue.

However, the families of the thousands who are missing remain skeptical, saying the pledge raises two more questions — when? and how?