No escape from violence for poor Filipino women

One in four women between 15 and 49 experiences physical, sexual, or emotional violence

Excel Buqueg, a 19-year-old mother of two, carries her youngest child outside the family's makeshift shelter in the hinterlands of the northern Philippine province of Cagayan. (Photo by Mark Saludes)

There seems to be no escaping violence, physical or otherwise, for many poor Filipino women, especially in rural areas.

At the age of 12, Excel Buqueg escaped from an abusive and violent stepfather who had been hurting her since she was six.

The young girl, now 19, was forced to live with a man much older than her who later fathered her two children.

"I was lucky to find a man who saved me from suffering," she said.

She might have escaped the violence at home, but not the viciousness of poverty and lack of access to social and economic opportunities.

Her partner, an Aeta tribesman, belongs to the poorest tribal community in the mountains of the northern Philippine province of Cagayan.

The couple live deep in the forest far from a village center and without a permanent shelter. They forage for food in the jungle to survive.

There is no private space where she can attend to herself as a woman.

"That's the hard part," she said in the local language.

"I can sleep under a makeshift shelter but it took me some time to adjust to having no toilet," said Excel who comes from the lowlands. 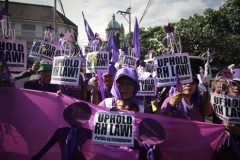 Women in the time of Duterte There have been times the couple have quarreled over how to get resources for them to survive.

"He’s never raised a fist to me," she said. But the supposed shared responsibility of raising the family was passed to her.

"He does not want to work and only relies on whatever we find around us," said the young woman.

To make ends meet, Excel works on nearby farms during planting and harvest seasons, slinging her children in a blanket that she ties across her back.

She never went to school and claimed that she has already forgotten how it feels to be a child.

Violence against women and children has become a pervasive social problem in the Philippines.

A National Demographic and Health Survey by the Philippine Statistics Authority in 2017 revealed that one in four Filipino women aged between 15 and 49 experienced physical, sexual, or emotional violence committed by their husband or partner.

Lawyer Patricia Miranda, policy advisor of the international aid agency Oxfam in the Philippines, said "structural violence deepens the system of violence against women and children."

She said social structures and institutions, including the community, "harm women by preventing them from meeting basic needs and rights."

"It becomes a cycle," said Miranda. "A girl might have escaped violence at home but she would still experience violence in some other form because of gender stereotypes," she said.

"How can women defend their rights if they do not experience the full range of economic, social and cultural opportunities?" she said.

Violence against women is manifested in different ways, including early marriage, lack of access to education and reproductive health.

Church groups have been trying to help women become aware of their rights, but the initiatives remain wanting.

Benedictine nun Mary John Mananzan said the women’s movement in the Philippines is strong and the country’s laws to protect women's rights are "the best in the world."

"[But] the problem is in the implementation of the laws and the culture or norms that dictate to people that women only take subordinate roles in society," noted the nun.

She said violence against women becomes normal in the eyes of many because even the highest public official is "an oppressor and exploiter of women."

Philippine President Rodrigo Duterte has repeatedly made jokes about women in public appearances.

"And because a lot of women are not aware of their rights, it becomes a societal norm," she added.

Oxfam's Miranda said people need to recognize that changes in laws, infrastructure and institutions are not enough without addressing the "harmful individual and collective beliefs that create and intensify power inequality."

The observance of International Women's Day on March 8 does not mean anything to Excel.

"If only my mother had fought for me [when I was younger], things would have been different," she added.