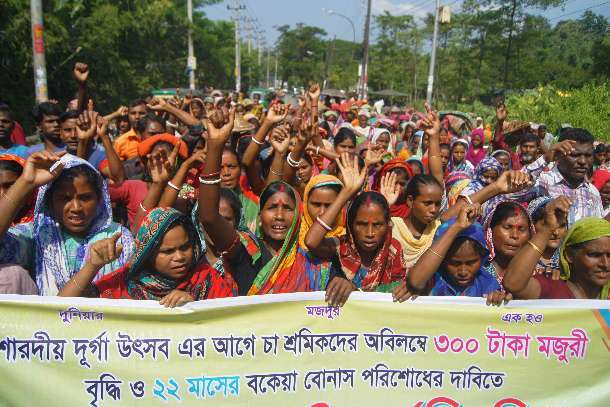 A new pay rise was announced on Oct. 16 following an overdue agreement between Bangladesh Tea Association and Bangladesh Tea Workers Union, which shocked many tea workers.

The agreement ended up fixing daily wage at 120 Taka, a nominal rise of 18 Taka (US$ 0.20). The new pay would be effective from 2019 and arrears paid in installments, which is not so much consolation but another round of worker exploitation.

This daily wage is not just the lowest in Bangladesh but the world. Bangladeshi farm workers get 300-500 Taka for a day's work, and an entry-level garment worker gets almost the same. Pitiful considering recent price hikes of daily essentials. For example, one kilogram of onion costs 90-100 Taka!

The pay is supposed to increase every two years, but each time the rise has been so minimal, it never contributes to improving tea workers' lives.

The powerful owners are politically and financially well connected, so the government never says or does anything against their interests, especially when it comes to the rights of workers such as a living wage.

Moreover, there was no hue and cry from labor leaders to improve the poor workers' fate. No civil society and rights group criticized such a poor pay rise. No media took up the issue seriously to bring to public attention the exploitation and plight of this marginalized community.

Except for a few people, no one seems to care whether these workers die in misery after toiling with sweat and blood for years to produce tea, the world's most popular drink after water.

This was evident even during Covid-19 when the whole of Bangladesh was locked down, except for tea workers who were forced to keep factories running with utter disregard for their health and safety. There are about 98,000 permanent registered workers and 30,000 seasonal workers in the industry. The estimated number of tea communities is about 700,000, trade unionists say.

The workers are low-caste Hindus and ethnic indigenous peoples, originally from various Indian states brought to East Bengal (now Bangladesh) by British tea planters in the mid-19th century with a false promise of a better life. They were cut off from their roots and consequently lost much of their language, culture, and customs.

Despite backbreaking jobs, they get a pittance of a wage. Still, again it is curtailed further with contributions to employee provident funds, religious funds and the cost of trade union membership. Some fringe benefits they get include a food ration of five kilograms of rice or flour at a subsidized price, free housing, and free medical care from the company.

Although housing is free, most workers cannot afford anything beyond mud-walled, thatched-roofed shanties, and long as a member of the family has a job in the estate, their relations can live with them. Despite living on the land for generations, the land won't become their own.

Poverty is endemic. A study in 2018 found 74 percent of households on tea estates were below the poverty line.

Medical facilities are scarce as doctors and necessary medicine are not readily available. A recent study found that 80 percent of women in tea estates give birth at home without proper medical facilities.

According to government regulation, tea estates are supposed to employ a welfare officer for every 500 workers, but most workers have never seen any welfare officer in their lifetime. Also, mandatory washing and toilet facilities do not exist in most estates.

As mandated by labor law, workers receive five percent of the company's profit – but tea industry workers do not get it.

Tea companies are supposed to ensure education for children of workers, but there are no schools except for some run by charities. Tea planters discourage education for workers' children to keep them unskilled for other professions and get trapped in tea estates for eternity.

British tea planters treated tea workers as slaves and even forced them to do dehumanizing works like cleaning their shoes to remind them constantly that they are lesser beings. The same mindset has been ingrained in owners' psyche during the Pakistan rule (1947-1971), and nothing has improved in independent Bangladesh.

Apart from civil society and rights groups in Bangladesh, no international group voiced concerns about tea workers' plight. Bangladesh is the world's ninth top tea producer with about 90 million kilograms of annual production, but no longer an exporter due to massive domestic demand.

Since 2016, tea production and profits have increased, but that has not benefited workers.

In Sylhet Diocese, about half of about 20,000 Catholics belong to the tea community, most of them descendants of workers who were Christians before they migrated to present-day Bangladesh.

The Church has been active among tea workers, mostly to provide spiritual, pastoral, and social services, and it must maintain good relations with tea estate management to ensure access. Church officials never criticize the inhuman treatment of tea workers and the violation of their human rights.

There are some schools offering education to tea workers' children and vocation training for them.

However, tea worker Catholics fail to get proper attention from the Church authorities because of other priorities, like the Khasia ethnic groups, who are smaller in number but socially and financially better off.

Thus, despite the Church's presence in tea estates for centuries, workers' socio-economic conditions remain almost the same. Only a few from the community have received higher education and obtained good jobs outside of tea estates.

Tea workers are human beings like us, yet they have been exploited and discriminated against for too long. They deserve dignity and a better life. The time has come to raise your voice to end their slavery and misery, or we too remain complicit, sucking on their blood each time we drink a cup of tea.