No end in sight to Rohingya suppression in Myanmar 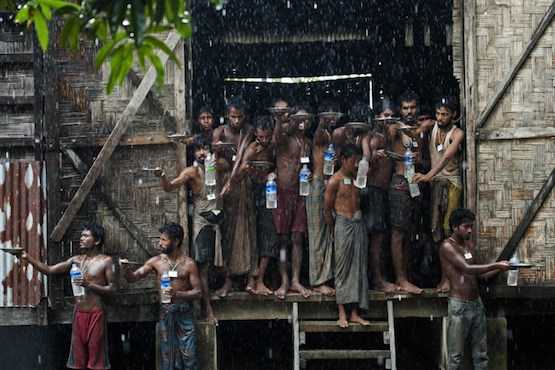 Migrants, who were found at sea on a boat, collect rainwater at a temporary shelter near the Kanyin Chaung jetty outside Maungdaw township, northern Rakhine State June 4. (Photo by AFP)

The hardline Buddhist Arakan National Party (ANP) that holds a majority of seats in Myanmar’s religiously divided Rakhine State has promised to fight any attempts to grant up to 1 million stateless ethic Rohingya citizenship.

For the new National League for Democracy (NLD) government in Myanmar, the first civilian administration in the country in more than five decades, the issue of Rohingya Muslims in Rakhine poses one of its most formidable challenge.

While the NLD's landslide win in the November 2015 election has brought optimism to the Rohingya community, its leader Aung San Suu Kyi has been silent on the issue.

International rights groups have criticized her for failing to speak out for the Rohingya, even as local NLD lawmakers have admitted they must tread carefully.

Yanghee Lee, United Nation's special rapporteur on Myanmar, in her annual report submitted to the UN in March, has given the NLD-led government 100 days to improve conditions for Rohingya Muslims.

But the government, which officially took office in April, is yet to reveal its policy on the Rakhine state issue publicly.

Pe Than, a lower house parliament member from in Rakhine, said that they will cooperate with the NLD-led government for the state’s development but will stand for the people’s desire on nationalism and on Bengalis — the name given to the Rohingya by many people in Myanmar including government lawmakers.

"We have much concern that ethnic Rakhine people would be overwhelmed by rapid population growth of Bengalis," Pe Than told ucanews.com.

"The NLD-led government doesn’t need to bow down to international pressure on prevailing human rights in Rakhine as we have lived with our own sovereignty for decades," Pe Than who has been twice elected from Rakhine State told ucanews.com on April 28.

The recent boat tragedy, where at least 21 people died, shows a restriction on the freedom of movement by Rohingya despite the state of emergency issued by the previous government in 2012 being lifted on March 29.

Win Naing, an NLD lawmaker in Rakhine State parliament said that that the central government will eventually decide on how to tackle the Rakhine crisis.

"It is a very delicate and sensitive issue for the new government and especially a big challenge for Rakhine’s chief minister," Win Naing said.

"If we move on right now, unexpected problems may occur and engender further opposition as nationalism is growing," he said adding that the ANP is "closely monitoring" the steps the NLD is taking in this regard.

Still, Win Naing said he understands that confining more than 150,00 people to refugee camps for almost five years is not appropriate nor good for the development of Rakhine State — besides tarnishing the image of the state and country.

"It is the legacy of the previous governments that failed to solve the issue but the new civilian government can’t neglect and delay this," Win Naing added.

The Rohingyas remain in often squalid internal displacement camps –with little access to healthcare, education and employment since deadly violence between Rakhine Buddhists and Rohingya Muslims in 2012.

Aung Win, a Muslim elder from Bume village near the camps, was hopeful that the government had considered the Rohingya issue and drawn up a plan already.

"But they are waiting for the right time to move on their plan as they might face strong opposition from nationalist groups and the Buddhist hardline party," he said.

"I think the view of Rakhine people would also need to be considered, so the new government, military and Rakhine people need to discuss tackling the issue together," he told ucanews.com.

Win Naing, the NLD lawmaker, pointed out that "if we emphasis on nationalism too much, the development of our Rakhine State may be delayed."

Hatred and bigotry toward the minority Rohingya have been deeply rooted in Rakhine.

Hundreds of Buddhist nationalists, including monks protested at the US embassy in Yangon on April 28 denouncing the word "Rohingya" which was used by the embassy’s statement of condolences for those who died in the recent boat tragedy.

By not recognizing 'Rohingya' and referring to them as "Bengalis," Myanmar’s governments have implied that they are illegal immigrants from neighboring Bangladesh, despite vast numbers of them having lived in Myanmar for decades.

The controversial 1982 citizenship law denies citizenship for Rohingya and so rights groups have repeatedly called for amending the law.

Pe Than said that Rohingya would need to be scrutinized by the 1982 law and those deemed to be citizens get the right to move freely in the country.

For those who are not deemed as citizens, it is the responsibility of the government on where they were to be lodged. "We would strongly oppose and fight against any NLD plan to amend the citizenship law," Pe Than said.