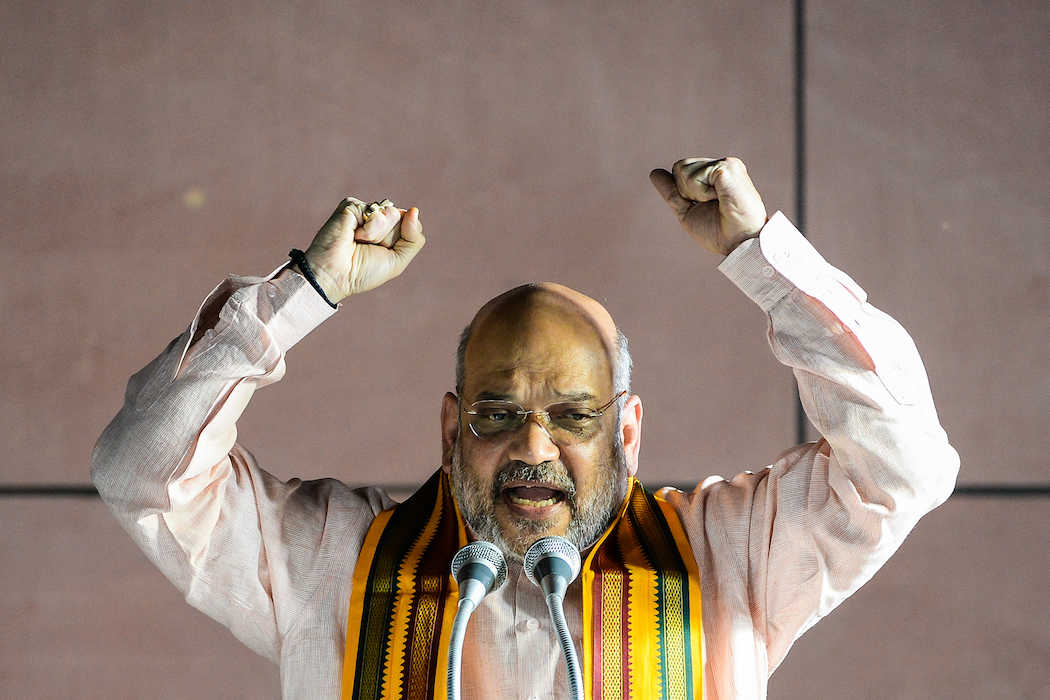 Bhartiya Janta Party (BJP) President Amit Shah addresses party supporters during a celebration event ahead of the Karnataka election in New Delhi on May 15. The BJP won most seats in Karnataka but fell short of a clear majority in the state of 60 million people. (Photo by Chandan Khanna/AFP)

Political wrangling began May 15 in India's southern Karnataka state amid fears of horse trading and defections as the crucial state election left no party having the required majority to form a government.

Prime Minister Narendra Modi's party secured 104 seats in the 224-seat house, emerging the largest seat winner but still eight short to get the 112-seat simple majority needed to form the government in the state.

Modi's Bharatiya Janata Party (BJP) has already claimed it will form the government because it has the largest numbers and the voting shows a swing against the incumbent Congress government.

Their leaders also say they would be able to prove the majority in the floor of the house, once government is formed, raising fears of buying legislators, intimidation and engineering mass defections in support of BJP.

But rival Congress party which won 78 seats and have decided to support to regional Janata Dal Secular (People's Party) that managed to save up 37 seats.

Congress leader and newly elected member Dinesh Gundu Rao told ucanews.com that the Congress-JDS alliance — formed after the election results were out — together has 115 seats, more than the required numbers.

Meanwhile Congress sources fear BJP 'poaching' into their camp and the party has taken all the newly elected members to a resort near Bengaluru (formerly Bangalore) to ensure BJP leaders do not contact them to offer inducements.

"Politically, the stage is set for horse trading. But BJP is to be blamed for this," a Congress party source said.

An anti-defection law threatens disqualification of a member of the house if they resign voluntarily from the party or votes or abstains from voting against the party directive. However, a party could be merged into another if at least two-thirds of its legislators voted for the merger.

Christian leaders like Archbishop Bernard Moras of Bangalore said their concern is the stability of the government, and not party politics.

"What we look forward to is a stable government that will take care of the welfare of the people and ensure peace and justice in the state," said Archbishop Moras.

BJP leaders and supporters claim in the event of fractured verdicts the order of preference according to established norms demands the single largest party be invited by the federally-appointed governor to first form government.

But political observer Shanta Patel noted that in elections in Christian-stronghold state of Goa and Meghalaya in 2017, Congress was not given the opportunity to form governments when it emerged as the single largest party.

Under the constitutional provisions, a state governor is empowered to invite the party or an alliance to form government after he is satisfied they have the required numbers or have the ability to provide a stable government.

In Goa and Meghalaya, BJP and other parties joined hands and grabbed power. "If the same yardstick applies, the governor should invite a Congress-JDS alliance," Patel told ucanews.com.

"[However] each governor are independent authorities. The convention of one governor is not binding for another governor. Moreover, these are discretionary powers and a governor acts by his wisdom," said Patel.

Assisted by governors, the BJP has grabbed powers during the past two years in states like in Manipur, Goa and Meghalaya by denying government to the single largest party (that being Congress) from an election. "They are changing the rules and conventions for them now," said Professor Vijay Manjunath, another political observer.

Karnataka governor Vajubhai Vala, is a former BJP member, who vacated his seat in Rajkot, Gujarat in 2002, when Modi needed to win an election after the party made him state chief minister. The 80-year-old BJP veteran had won his Rajkot seat for a record seven times and served also as BJP president in Gujarat.

"Vala has been a BJP leader and close to Prime Minister Modi, so you can draw your conclusion," Manjunath said.