A file image of Rohingya children and elders gather at the Thet Kel Pyin camp in Maynamr's Rakhine State during the Eid al-Adha celebrations on Aug. 22, 2018. (Photo by Phyo Hein Kyaw/AFP)

For Ma Htwe, there is no other realistic option than to leave an internally displaced person's (IDP) camp in Myanmar to join a government resettlement program.

She is among 100 family groups from Taung Paw IDP camp in Myaebon township, of troubled Rakhine State, to be moved.

The new resettlement area is next to the existing camp where more than 2,700 ethnic Rohingya and other Muslims have been living since an upsurge of communal violence in 2012.

Ma Htwe said she had been living in a house along the main road in Myaebon town before 2012 near to members of the majority Buddhist Rakhine community.

"There is no prospect of getting access to our original homes; we have to accept the resettlement plan," Ma Htwe said.

However, living conditions have not improved a great deal.

She and others still have to contend with inadequate drainage, as well as shortages of electric power and water, in the new resettlement area built amid paddy fields.

Movement outside the resettlement area was still restricted, Ma Htwe, a mother of four, told ucanews.com.

Local authorities have built 200 new houses and another 100 remain under construction.

A second group of 100 families are yet to be moved there. 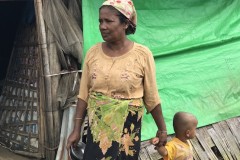 Cho Cho, a leader of Taung Paw camp, said proper houses were an improvement on previous makeshift dwellings, but there was still a lack of rights.

"Our ultimate desire is to have freedom of movement and access to education, health care and jobs," Cho Cho, who holds a national identity card, told ucanews.com.

She added that requests by people to be allowed to return to their original homes had been denied.

More than 120,000 Rohingya remain in internal camps in central Rakhine State in what critics have compared to 'apartheid' in South Africa that ended in the early 1990s.

They cannot move freely and have no access to health care, education or employment. Camp inmates mainly rely on aid from the United Nations and non-government groups for daily survival.

The closing of all IDP camps in Rakhine is a key recommendation by the late Kofi Annan-led commission established by State Counsellor Aung San Suu Kyi in 2016 to address root causes of the conflict in the religiously and ethnically divided state.

The commission recommended that the government take concrete steps to end enforced segregation of Rakhine Buddhists and Rohingya Muslims.

Kyaw Hla Aung, a Rohingya activist from Thetkaepyin IDP camp near Sittwe, the state's capital city, doubted the government's plan would succeed as elements of it were contrary to the Kofi Annan recommendations.

There had been no consultations with Rohingya IDPs, Kyaw Hla Aung told ucanews.com.

He added that dire conditions in the IDP camps had led to people taking dangerous sea voyages to Malaysia.

"We remain in the camps like an open-air prison and the conditions are not improving so I lose hope in Aung San Suu Kyi's government," said Aung, who last year received the international 'Aurora Prize for Humanism' in Armenia.

In November, Myanmar authorities detected at least four boats, each carrying scores of men, women and children, that departed from Rakhine State for Malaysia.

The Rohingya spent several days at sea after they ran out of fuel and food and lost their way.

They were intercepted by Myanmar's navy and returned to their villages or internally displaced person (IDP) camps in Rakhine.

Pe Than, a lower house MP for Myaebon constituency from the hard-line Buddhist Arakan National Party, said it is not currently possible for Rakhine and Muslim communities to live together because of security concerns.

And he said Muslims are concerned that they could lose assistance from international non-government aid bodies.

"Our main concern is that it may erupt into communal violence if we live together," Pe Than, an ethnic Rakhine, told ucanews.com.

Myanmar's move to close down more IDP camps came amid harsh criticism from the international community over Myanmar's military crackdown on Rohingya Muslims beginning August 2017 that led to more than 700,000 fleeing to Bangladesh.

A United Nations fact-finding mission has called for Myanmar's senior generals to be prosecuted for genocide. However, the Myanmar government defends the crackdown as a legitimate response to attacks on security posts by armed Rohingya militants.

The Myanmar government regards the Rohingya as Bengalis. By not recognizing the term 'Rohingya', the government has implied that they are illegal immigrants from neighbouring Bangladesh despite vast numbers of them having lived in Myanmar for decades.