More than 100 pro-democracy figures have been arrested under a law, mostly for expressing political views 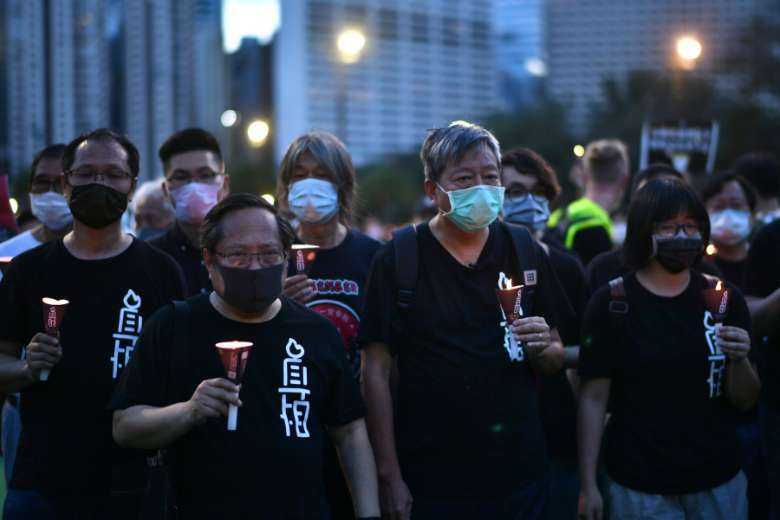 This file photo taken on June 4, 2020 shows Chairman of the Alliance in Support of Patriotic Democratic Movements of China and former Legislative Council member, Lee Cheuk-yan (2nd R), leading a candlelit remembrance with other activists after crossing downed barricades into Victoria Park in Hong Kong, after the annual vigil that traditionally takes place in the park to mark the 1989 Tiananmen Square crackdown was banned on public health grounds because of the COVID-19 coronavirus pandemic. (Photo: AFP)

Nine veteran democracy activists in Hong Kong were sentenced to between six and 10 months in jail on Wednesday for joining a Tiananmen vigil banned by police last year.

Three others were handed suspended sentences on the same charges of joining an unlawful assembly or inciting others to join.

The sentencing came one week after leaders of the group behind the annual vigil were separately accused of inciting subversion following a police raid at a museum in the city dedicated to Beijing's Tiananmen Square crackdown in 1989.

The Hong Kong Alliance had organised three decades of vigils commemorating the victims of the operation.

Once one of the most visible symbols of Hong Kong's political freedoms, the June 4 event has been banned over the past two years, with authorities citing the coronavirus pandemic and security fears.

But China is also in the process of remoulding the financial hub in its own authoritarian image following huge and often violent democracy protests that had convulsed Hong Kong in 2019.

Prominent democracy figures have been arrested and anyone deemed "unpatriotic" purged.

On Wednesday, Albert Ho, former vice chairman of the Hong Kong Alliance, was handed terms of 10 months for incitement and six months for attending the vigil.

His terms will be served concurrently with 18 months he is already serving related to other cases.

The case over the 2020 vigil involved a total of 26 activists across Hong Kong's political spectrum.

Two, Nathan Law and Sunny Cheung, had left the city for exile before the group were first summoned to court in September last year.

The last eight defendants, who pleaded not guilty, will face trial in November.

Tens of thousands of people had defied the police's ban on the 2020 vigil and massed peacefully at the city's Victoria Park.

In recent years, crowds at the annual event had swelled as anger intensified over how Beijing was running Hong Kong.

Tolerance for such political defiance has since ended.

More than 100 pro-democracy figures have been arrested under the law, mostly for expressing political views.

Most are denied bail and face up to life in prison if convicted.

Last week, the organisation and its three leaders were charged with "incitement to subversion" after police were seen carting away documents and exhibits from the group's now-shuttered June 4 museum.