Attacks against Christians, especially Catholics, have been on the rise in the African country 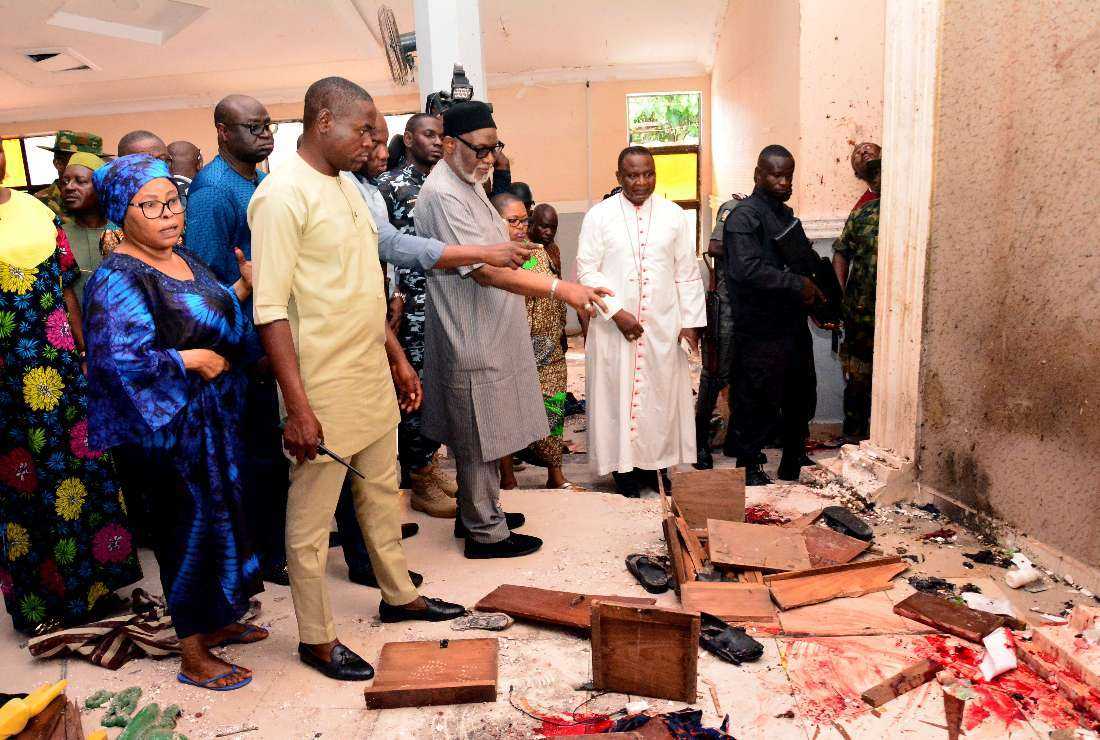 Ondo State governor Rotimi Akeredolu points to blood on the floor after an attack by gunmen at St. Francis Catholic Church in Owo town, southwest Nigeria, on June 5. (Photo: AFP)

While the Catholic Church continues to play its part in helping people in Nigeria, the policies of the current government obstruct a clear path toward peace and reconciliation between Christians and Muslims, said Bishop Matthew Hassan Kukah of Sokoto.

Addressing a virtual conference on building peace, hosted by the Kroc Institute for International Peace Studies at the University of Notre Dame, Bishop Kukah said the rise of banditry and violence in Nigeria "has taken over and consumed a lot of the gains we have made."

"Just to tell you how little progress we have made, we still have a military general as our president. And, therefore, it is little wonder that this journey has proven to be a challenge and a source of great difficulty for our people," he said June 20.

Attacks against Christians, especially Catholics, have been on the rise in the country. On June 5, gunmen entered St. Francis Xavier Church in Owo, killing at least 50 people and leaving dozens wounded.

Most recently, gunmen attacked churchgoers on June 20 at St. Moses Catholic Church as well as a neighboring Baptist church in the northern state of Kaduna, killing three and kidnapping 40.

Bishop Kukah said Nigerian President Muhammadu Buhari's "military background and lack of disposition toward the principles of democracy and democratization" have eroded the gains in reconciliation between Christians and Muslims, and "the country is far more divided now than it has ever been."

"It is a difficult journey, but our churches still have the moral authority to continue to lead our people to a land in which freedom, justice and fairness can take root"

"Because our Muslim president has never developed a sense of fairness — in terms of power sharing and developing an inclusive system — we are far worse off in terms of relationships than we were before the end of the military dictatorship," the bishop said.

Many Nigerians, he explained, believed that the end of military rule "was going to be synonymous with freedom. And that freedom was going to come with more food on the table."

Instead, "people have become quite desperate and despondent" while others have resorted to violence and kidnapping for ransom to make ends meet.

"As I'm talking to you, two of my priests are being held in captivity," Bishop Kukah said. "They have been in the hands of bandits for the past three weeks, along with two laypeople. These are the realities that the Church is facing, so it is increasingly difficult to confront these problems."

Despite the challenges, Bishop Kukah said the Catholic Church plays a vital role in bringing hope to Nigerians and encourages them to continue to believe "that there is no alternative to democracy."

"It is a difficult journey, but our churches still have the moral authority to continue to lead our people to a land in which freedom, justice and fairness can take root," the bishop said.

"In truth, there is no substitute for engagement; there is no other way. Everyone in human history has ended up around a table," he said.