NGOs prize degrees from abroad, ignoring the value of study and life experience that is contextualized in the local situation 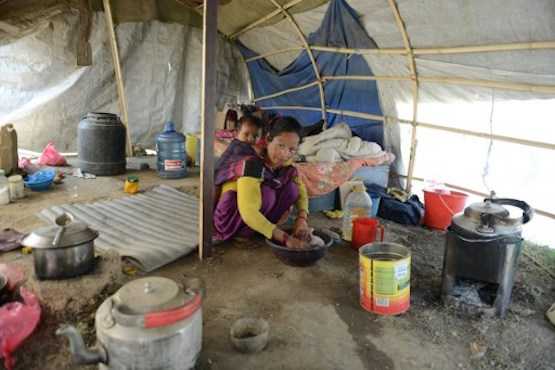 Nepalese earthquake survivor Menuka Rokaya cares for her child on the outskirts of Kathmandu on April 21. A year after an earthquake flattened her home in Nepal, Rokaya still lived in a tent with her husband and nine-month-old baby as they waited for even a sliver of a US$4 billion aid fund. (Photo by AFP)

Nepal's recently celebrated its greatest Hindu festivals of Dashian and Tihar where family members gathered to bless each other, sacrifice a goat and pray.

But this year one third of the population did not celebrate this festive season. These are the families affected by the devastating earthquakes of 2015. Over one and half years have passed and public agony continues, with people still living under tarpaulins and corrugated iron.

To begin with, establishing the National Reconstruction Authority took a long time. Recovery efforts were further paralyzed when, following the promulgation of a new Nepalese constitution, India imposed an undeclared blockade of Nepalese supply lines. Villagers in Barpak, the earthquake's epicentre, have decided they can no longer wait for government aid, and have started reconstruction on their own.

The 2015 earthquake destroyed or seriously damaged the homes of nearly 800,000 families. The government projects a total recovery and reconstruction bill of US$6,695 million. The government has pledged to distribute 300,000 rupees to each household to reconstruct their house. This is a tiny subsidy. Only 60 percent of households have received their first installment of 50,000 rupees. The second installment is due upon completion of a certain level of construction. For poor families, fully reliant on the subsidy, achieving the progress required is difficult. In some places, people used their first installment for other needs because they doubt that a second installment will eventuate.

Food shortages, heavy monsoon rains, landslides, roadblocks, and lack of access to markets or communications compound people's suffering. Reconstruction progress is not being monitored, with many places lacking the presence of both government and NGOs.

I have a friend assisting in earthquake recovery. Even today, in Kathmandu, he and his eight family members live under corrugated iron sheets. If this is the situation in the capital, what is it like in the remote villages?

Problems among the NGOs abound. More than 50 of the 259 International NGOs approved to work in Nepal are new to the country, arriving only after the earthquake.

They are obliged to work via local organizations. Typically, they partner with Kathmandu-based organizations, whose staff have good English and access to power. The running costs of these organizations are high. While Nepal's GDP per capita is US$700, some development professionals charge US$300 for a speech barely one hour long. Over the last decade, I have observed how a syndicate of such consultants and self-proclaimed experts control Nepal's NGOs.

Overseas training is another problem. NGOs prize degrees from abroad, ignoring the value of study and life experience that is contextualized in the local situation. It is people from wealthier families that can afford to study abroad and win local jobs on return. The result is a development that is presented well in written reports but not in reality.

Moreover, a single project requires several layers of local NGOs, leading to higher operational costs — in some cases as much as 70 percent of the total budget. Another alarming trend is over-expenditure. Some NGOs spend more than needed simply because they have the money.

Tensions between expats and local NGO staff are piling up. Big international NGOs regard local brains as empty vessels that must be filled with modern knowledge from abroad. Local workers, already traumatized by the earthquake, further suffer under the expats, who hold power over them because of overseas funding sources.

Many such NGOs send inexperienced personnel to manage their projects. Some expats discriminate against or dominate local staff. I sometimes wonder whether this is a form of neo-colonization inside the NGO community. Recently, my thoughts were given concrete illustration when a friend's brother, a former employee of a reputed NGO, committed suicide.

Some bilateral projects are worse. Local NGOs have to bribe officials to win contracts. One local partner told me that, in exchange for a project contract, officials demanded 20 percent of the total budget back under the table.

A few months ago, the Ministry of Local Development commanded its district offices to withhold approval from projects associated with religion. Some local media have criticized development work undertaken by religious organizations. There have also been incidents of political parties attacking Christian organizations — vandalizing offices, burning vehicles and seeking donations.

As Christian organizations confront these challenges from state and non-state actors, we need to ensure transparency, and a balance between the cost, quality and timeliness of our work. These are the obstacles we must overcome so that we can bring hope to devastated people, and rebuild a community from the ground up.