Large parts of capital Jakarta under water as Church springs into action to help at least 20,000 forced to flee homes 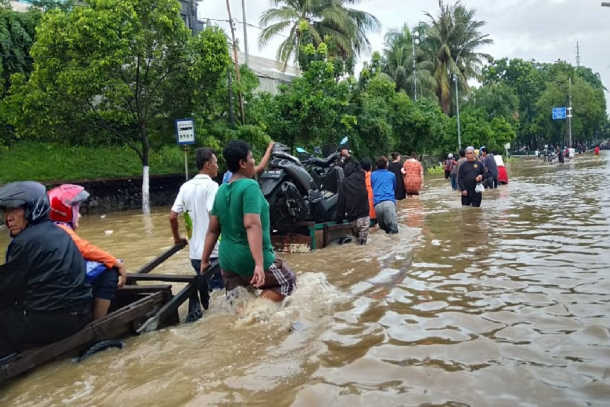 At least 16 people have been killed in severe flooding during the New Year period in and around Indonesia’s capital Jakarta, according to the country’s National Disaster Management Agency (BNPB).

More than 20,000 others were forced to flee their homes that were submerged because of torrential rain that fell on New Year’s Eve and which also paralyzed Jakarta’s Halim Perdanakusuma Airport, the agency said.

Normal operations at the airport were resumed on Jan. 2.

The disaster agency said the floods, described as the worst in years, killed eight people in central Jakarta, including a 16-year-old high school student who was electrocuted. The others died in the adjoining cities of Depok, Bogor, Tangerang and Bekasi.

"We are continuing to monitor developments and expect the number of fatalities to rise,” BNPB spokesman Agus Wibowo said on Jan. 2

He said the heavy rainfall caused the Ciliwung and Cisadane rivers to overflow and submerged many parts of Jakarta.

Yusni, a Jakarta resident, said her family were asleep when their home was flooded. "When we awoke, water was flowing into the house,” the mother of two told ucanews.

Jakarta governor Anies Baswedan called on Jakarta residents and organizations to provide food for families affected by the flooding. He also warned that more flooding was likely during the rainy season that lasts until March.

Yosepha Ajeng, from the Daya Dharma Institute, the archdiocese’s social wing, said an aid gathering post had been established where people can donate money and relief items to be distributed to those affected by the floods.

It was providing boats to assist flood victims in South Jakarta and nearby Bekasi in West Java.

"We have asked Catholics to provide food, soap and medicines to victims," Ajeng told ucanews.