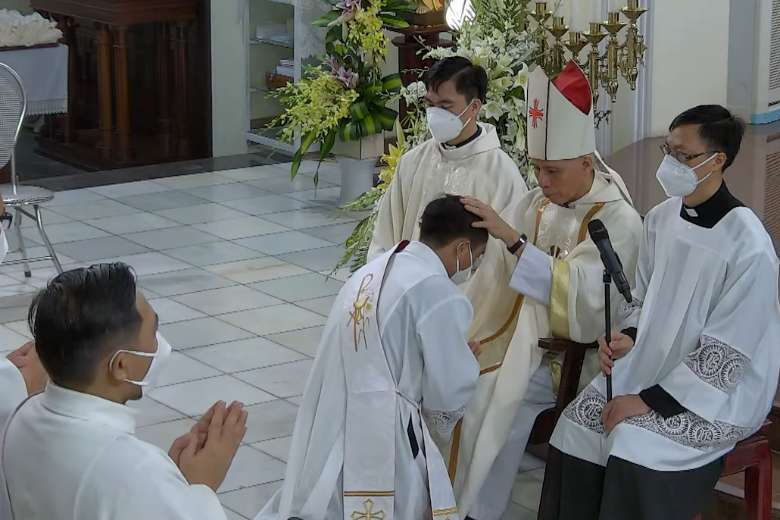 Newly ordained priests in northern Vietnam have been asked to become gentle and humble servants and bring the love of Jesus' Sacred Heart to people.

Due to the Covid-19 lockdown, only a few priests and nuns attended the ordination, which was aired on the diocese's website.

The new priests concelebrated their first thanksgiving Mass at the cathedral on June 12.

In his homily, Vicar General Father Peter Nguyen Cong Van said the feast invited the new priests to reflect on God's love for priests and the laity, urging them to carry out that love by being pastors and following Jesus’ words: "I have come that they may have life, and that they may have it more abundantly."

He said Jesus taught his disciples to "learn from me, for I am gentle and humble in heart," not for being good at foreign languages, building and other things. "That is the crucial nature of priests and Christians."

Father Van called on local Catholics to pray for priests to fulfil their pastoral duties, especially proclaiming good news about the sheer abundance of God, to get united in Christ, to bravely do evangelization and to live a gentle and humble life like Jesus.

He said priests' duties are to follow Jesus' examples and die on the cross so as to bring salvation to the world.

Noting priests are invited to humbly work with and obey their bishops and superiors, the priest said that "we are priests after God’s heart, do not do priesthood against his will.”

Priests must seek prayers from the laity. Catholics should pray to God for the sanctification of their priests who have weaknesses and limitations. People must change themselves to be like Jesus who is humble and gentle in heart, Father Van said. He also urged people to pray and support priests with their respect and sympathy to please the Sacred Heart of Jesus, who always loves and protects them all their life.

Father Van said the solemnity of the most Sacred Heart of Jesus is the World Day of Prayers for the Sanctification of Priests, so local people prayed for their priests on June 11-13.

Bishop Dat said the late Cardinal Paul Joseph Pham Dinh Tung, who served the diocese from 1963-94, offered the local church to the Sacred Heart of Jesus when it had a few old priests and suffered much damage from wars. The cardinal prayed to God for a sure sign indicating that the cathedral would not be destroyed by wars and his prayer was answered.