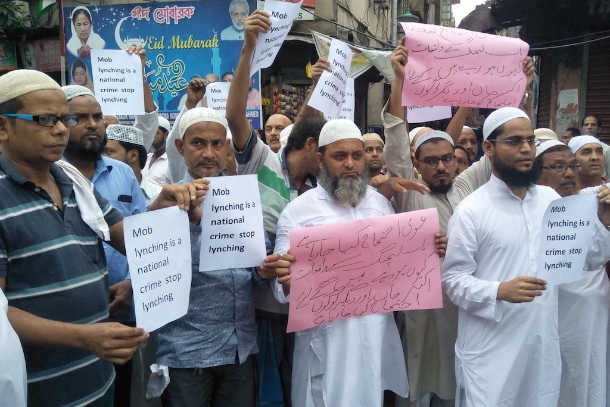 Muslims demonstrate in Kolkata on July 25 against a spate of mob lynchings of Muslims by cow vigilante groups. (Photo by IANS)

Prime Minister Narendra Modi's BJP, which took power in New Delhi in 2014, "has been linked to incidents of violence against members of Dalit, Muslim, tribal and Christian communities," the report said.

It said reports have documented the "use of inflammatory remarks by BJP leaders against minority groups" and the "rise of vigilantism targeting Muslims and Dalits" in India.

The report mandated by a 2017 U.N. General Assembly resolution aimed to analyze "threats posed by nationalist populism to the fundamental human rights principles of non-discrimination and equality."

Rights activists in India say BJP leaders continue to express their bias against Muslims and Christians in public speeches and media, stressing Hindu dominance in a country where 80 percent of 1.2 billion people are Hindu.

"You take any newspaper or watch news on television. Whenever their leaders speak, they speak openly against those groups who are already suffering and are never interested in defending them," said Christian leader A.C. Michael, responding to the report.

Michael said the ruling party's leaders consider minorities, including Dalits and tribal people, as second-class citizens and want them to stay away from the mainstream. "There were even calls to banish Christians and Muslims to other countries, instigating violence against these people," he said.

Christians suffered violence in 24 of 29 Indian states in 2017, according to a 2018 report by Persecution Relief, a Christian group documenting anti-Christian violence in India. Last year India recorded 736 incidents of attacks against Christians, more than double the 348 incidents reported in 2016.

Madhya Pradesh, where the BJP has governed for 15 years, recorded 52 incidents, an increase of 54 percent from 2016.

Achiume's report said that in many countries nationalist parties have brought in administrative reforms that result in exclusion of minority groups. It referred to a citizens' registration program implemented by the BJP in Assam state that rendered millions stateless — mostly Muslims who arrived from neighboring Bangladesh decades ago.

"The discrimination and inflammatory statements are so blatant that international agencies have started noticing them," said Shabnam Hashmi, a rights activist and Muslim based in New Delhi.

She said it was shameful that those in power propagate violence against minorities and other marginalized sections including Dalits, tribal and women.

In the past four years, vigilantism to protect cows — revered animals in Hinduism — has resulted in the murder of Muslims.

At least 10 Muslim men have been lynched and many others injured by cow protection groups, many of which seemed to operate with the support of the BJP, rights group Amnesty International said in a report this year.

Mukti Prakash Tirkey, editor of a weekly on Dalit and tribal affairs published in New Delhi, said the "time has come that Dalits, Muslims and Christians should unite to fight for their rights."

Tirkey, an activist and tribal leader, said the welfare polices Modi's government announced for tribal people "were just an eyewash … they all are just on paper and people's conditions have only worsened."