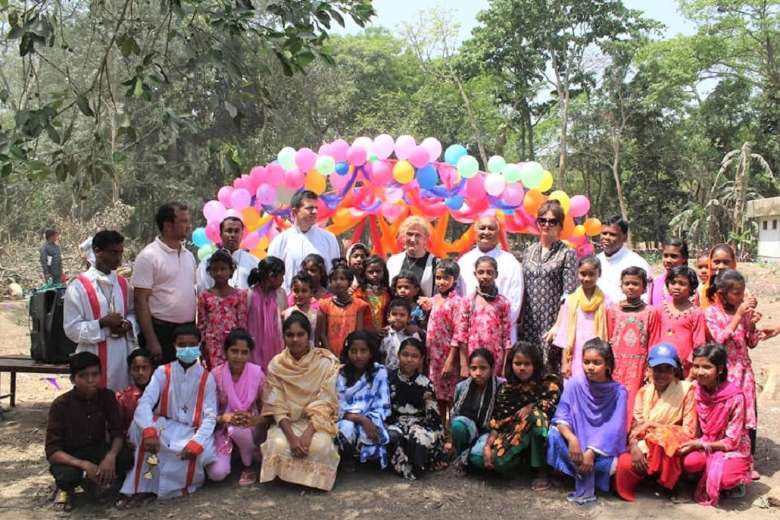 A Catholic diocese in northern Bangladesh has started construction of a shelter for orphan girls in an area near the Indian border where poor and destitute children often suffer from homelessness.

Bishop Gervas Rozario of Rajshahi kickstarted the foundation-laying ceremony of St. Joseph Orphanage at Christ the King of Peace Catholic Church of Chandpukur in Naogaon district on March 27.

The center is expected to be completed by Dec. 8 and will allow about 150 girls, both Christian and non-Christian, to reside and get free education from pre-primary to high school (10th grade).

The initiative is part of the local Church’s programs and activities in the Vatican-designated Year of St. Joseph. It draws funding from the Spain-based Jose Soriano Ramos Foundation.

Colombian missionary Father Belisario Ciro Montoya from the Pontifical Institute for Foreign Missions (PIME), the parish priest and fundraiser for the center, said that it aims to tackle homelessness among poor girls.

The local Church already has two hostels for 360 Catholic boys and girls, mostly from ethnic indigenous communities who stay there to study in church-run schools.

“Orphans and poor girls will be housed here. Those who do not have parents will be kept for free and those who have parents will be asked for only nominal contributions considering their condition. Keeping it absolutely free is not a good practice,” Father Montoya told UCA News.

“I want girls of all religions to stay in this center. Hindus, Christians or Muslims can all stay here and study here.”

The priest said the Catholic Church has been supporting poor orphan children for years.

“Orphan children have been nurtured by the church authority. When they were married off, priests and nuns listed their names as their guardians,” Father Montoya added. Help is at hand for Bangladeshi street kids Christ the King of Peace Church has about 5,500 Catholics, mostly poor ethnic indigenous people, many of them impoverished farmers, farm workers and day laborers.

This remote area near the Indian border is underdeveloped and poverty-stricken as it suffers from a lack of basic services including education and employment opportunities.

Mathius Murmu, 45, a Santal Catholic farmer and father of three, expressed great hope that the orphanage will bring fortune for poor girls in the area.

“I’m happy to know an orphanage center is being constructed. I think our girls will be able to study here and change their destiny,” Murmu told UCA News.

“Most indigenous people here are uneducated, so this center will make a special contribution by helping educate their girls. I thank all those behind this initiative."

Bangladesh has tens of thousands of homeless and street children who face a bleak future without any education and are often abused and exploited.

A European Union-funded study in 2019 revealed that there were more than 700,000 street children in Bangladesh who were vulnerable to abuse including hazardous working conditions in factories and commercial sexual exploitation.

The local Church in collaboration with religious orders and Catholic charity Caritas Bangladesh runs orphanages and training centers in two archdioceses and six dioceses across the country to improve the lives of hundreds of poor orphan children.

Myanmar: Another Syria in the making