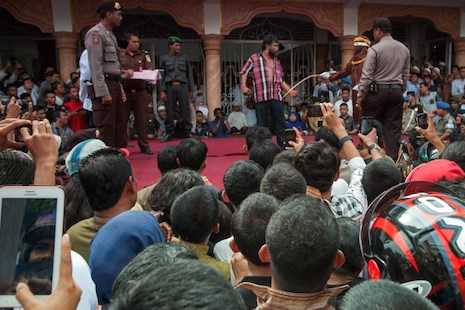 Members of minority communities in Indonesia’s Aceh province say they are worried about how non-Muslims will be treated after its parliament passed a sharia-based law that stipulates tough new punishments — including caning — for offences including adultery and drinking.

The Aceh Islamic Criminal Code, or Qanun Hukum Jinayat, stipulates that non-Muslims caught violating the law will be given the option of being tried at a sharia court or at a regular criminal court using Indonesia’s national penal code. However, if the act is not regulated under the penal code, even non-Muslim violators may be tried under sharia law.

The consumption of alcohol, for example, would be punishable by 40 strokes of the cane.

Stanislaus Djehaut, a Catholic who has lived in Aceh for six years, said such a sentence would be unfair.

“I’m forced to accept such a punishment, which I don’t recognize and isn’t taught by my religion. It’s obviously a human rights violation,” he said.

Provincial lawmakers passed the bylaw September 27 as a revision to a controversial 2009 law — since overturned — that would have made adultery punishable by stoning. The bylaw passed Saturday removes the stoning sentence, but continues to impose caning as a form of punishment for a range of offenses including adultery, alcohol consumption, fraternizing between unmarried men and women and gay sex.

Aceh is the only jurisdiction in Indonesia allowed to carry out Islamic or sharia law. Muslims comprise more than 98 percent of the population, according to 2011 data from Indonesia’s Home Affairs Ministry.

Many religious minorities have become increasingly unsure of how they will be affected by sharia law, particularly with the new bylaw.

“How can Catholics be caned because they violate sharia?” said Hermanus Sahar, a priest at the Most Sacred Heart of Jesus Parish in Banda Aceh, the provincial capital.

“People here have different religions, races and ethnic backgrounds. The law must not be implemented here … Catholics refuse to follow sharia.”

It’s also far too ambiguous for many.

“We don’t know exactly what the law means by alcohol consumption,” said Kikin Tarigan, chairman of the Aceh chapter of the group Catholic Youth. “Is it just drinking alcohol, or drinking alcohol until getting drunk?”

Others feel the bylaw is further marginalizing religious minorities.

“I can predict that within the next 20 years, [Aceh] won’t be open to diversity anymore,” said Domidoyo Ratupenu, a reverend and chairman of the Communion of Churches in Indonesia’s Aceh chapter.

“Even though they have slogans accepting other faiths, it’s difficult for us to see it in reality.”

Surya Sanny, a Buddhist woman who has lived in Aceh since childhood, worries that sharia laws will be increasingly restrictive for non-Muslims.

“We, women, have to wear headscarves,” she said. “Not to mention other things regulated in other Islamic bylaws. We must follow them all.”

“Qanun Hukum Jinayat takes away the freedom of civil society, particularly for non-Muslims,” he said.

The bylaw must still be passed by Aceh’s governor, then reviewed by the Home Affairs Ministry.

New York-based Human Rights Watch called on Aceh’s provincial legislature to repeal the bylaw, and for incoming Indonesian president Joko Widodo to review local laws, such as Aceh’s, that may be discriminatory.

“The two new bylaws deny people in Aceh the fundamental rights of expression, privacy, and freedom of religion,” Phelim Kine, the group’s deputy Asia director, said in a statement. “Criminalizing same-sex relations is a huge backward step that the Indonesian government should condemn and repeal. Whipping as punishment should have been left behind in the Middle Ages.”

For now, provincial officials maintain the law will not negatively impact minorities. Syahrizal Abbas, head of the province’s sharia agency, offered an open invitation to visitors.

“The law doesn’t bind non-Muslims at all,” he said. “For non-Muslims, please come to Aceh.”